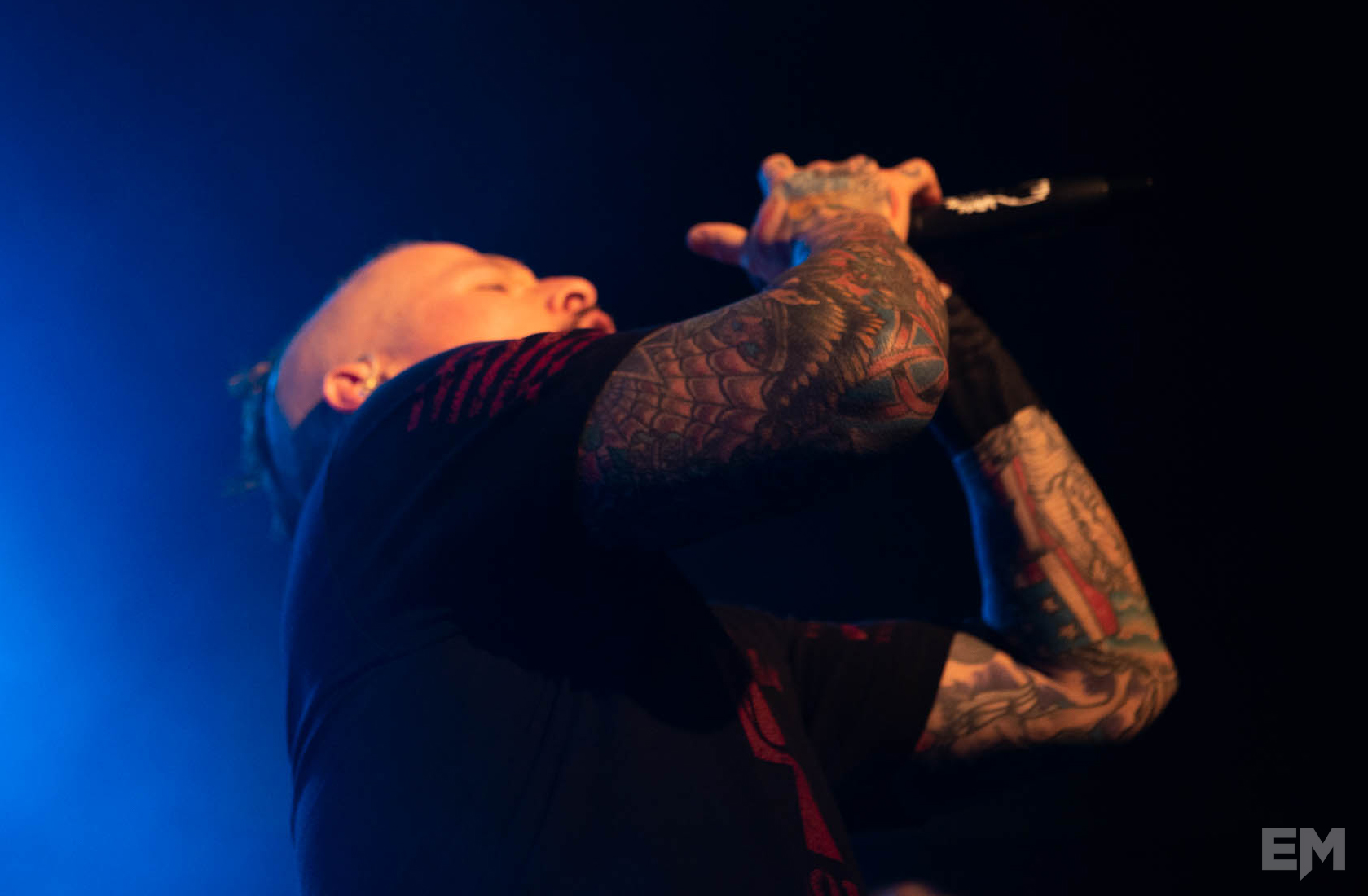 Words by Clare
Photos by Mitch

It appears as though the metal gods have smiled down on us once again by bringing to our shores the newly reformed Dark Angel, the band that established themselves in the early 80’s and gained a cult-like status in the thrash metal underground scene. Most will know them for their second studio release album, the highly influential, Darkness Descends and now Darkness Descends Downunder for the first time ever. This is the kind of event that draws all the old school metalheads out of the woodwork and into the city on a river of battle jackets, and there were some pretty sweet battles jackets there. I love a mature metal crowd, they know how to have a good time but they also know how to respect each other’s good time too with plenty of laughs.

Melbourne local band Harlott started off the night by warming us up with some classic 80’s style metal riffs, fast drumming and strong gritty vocals. Although this band first formed in 2006, they completely invoke the spirit of 80’s thrash metal and gave us some serious early Metallica and early Slayer feels. They were definitely playing to the right crowd here, but honestly, who wouldn’t enjoy it?

Who else to join Dark Angel on their first ever Australia wide tour than Melbourne’s own Grindin’ Thrashin’ Punk Wrecking Machine, King Parrot, who you all know for their on stage antics and their downright lethal, metal tracks. King Parrot is not just a band from Melbourne, but they quintessentially Melbourne, either they are mates with your best mate, or they’re friends with your sister, or maybe you just know em from kicking around in your neighbourhood. Either way, if you’re from Melbourne, you know these fellas. We are gifted with some tightly coiled and pretty hectic thrash tracks and also gifted with a shirtless Slatts, a tasty chicken nugget of a man, “It’s good to be back in Melbourne, how ya goin’ ya cunts!”. King Parrot will be performing soon at Sound System Studios in Sunbury, but with their first show selling out, “How good is that!”, they added a second night, so get in quick and as Uncle Slattsy says, “bang your head with gay abandon you bunch of pussies!”.

An intro plays as Dark Angel slowly make their way onto a darkened stage lit only by a flood of blood-red light. As they start to perform tracks like ‘Never to Rise Again‘ and ‘The Burning of Sodom‘ we see that their stamina and strength have not subsided at all in the 27 years since Dark Angel first disbanded and they prove to us once again why they were dubbed as the ‘LA Caffeine Machine’. Vocalist Ron Rinehart thanks us all for coming out and shares his excitement for finally being here in Australia among his people, “My people…… Who feels the need for speed, who wants to go fast?’. Dark Angel were really swinging big with this set and playing some tracks that they have not always brought out in a live setting. They thrash through ‘No One Answers‘ a track off their 1989 album release ‘Leave Scars‘ and ‘Pain’s Invention, Madness‘ from their album released in 1991 ‘Time Does Not Heal‘. This was a thoroughly enjoyable show and fans were thrilled to be able to share this rare experience with each other and the band and they were ridiculously vocal about it! The crowd participation tonight was hilariously overwhelming, with the audience screaming out requests and comments, singing along to all the tracks, chanting “Dark Fucking Angel” and “wall of death” and Dark Angel were giving it right back with drummer Gene Hoglan enjoying using (a little too much) the popular Aussie colloquialism of calling us all ‘cunts’. During the set Dark Angel performed their track ‘Death is Certain (Life Is Not)’ from their second album release ‘Darkness Descends’ as a way to remember the people in their lives that they have lost along the way, and they urge us to do the same, a very touching sentiment. Dark Angel leave the stage, but grace us with their presence one more time for an encore. This was a truly wholesome but heavy good night out for all!

Keep up to date with the bands on their official social media:

CRADLE OF FILTH – CRUELTY AND THE BEAST AUSTRALIAN TOUR