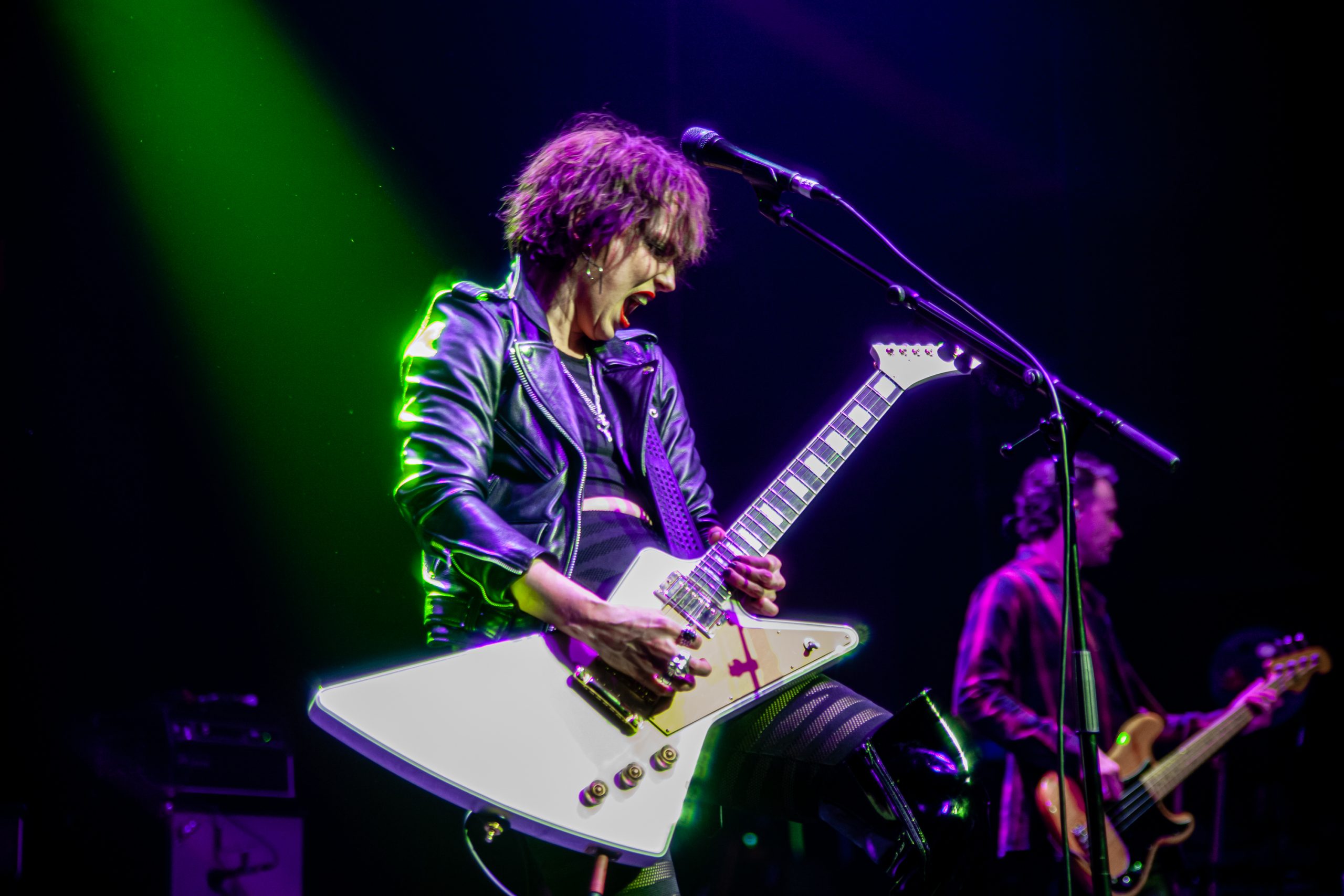 Before we jump headfirst into 2020 we take a look back at the last show of 2019. The Forum Theatre in Melbourne’s city center was host to Americas Halestorm who were performing in what would also be their last performance of the year, and they made sure that is was going to be a good one!

It’s always a pleasure when I get to visit the Forum which by far has the most unique architecture out of all of Melbourne’s metal music venues. With its faux sky ceiling, Romanesque columns and dramatic gothic style, it’s perfect for the hard rock juggernauts that are Halestorm. I walked into the venue past the security and to my left I saw the ridiculously long line for the merch stand that snaked all the way up the staircase to the mezzanine level. I continued through to the main room and found myself amongst the pretty chilled crowd in what Lzzy would later call the ‘best rock n roll fans in the world’, and they did seem cool. Most were rocking either new or old school Halestorm tees, others were wearing band tees like Metallica, Slayer, ZZ Top, Black Sabbath and Metal Church, so yeah, they were alright in my books.

Warming up the crowd for the night was Villainy from Auckland, New Zealand who haven’t performed in Melbourne for few years, but they still consider it their spiritual home, having recorded all 3 of their albums here. I would say this band is alternative rock, but each song they played on the night stretched the barriers of that genre that seemed to borrow from a wide range of different styles. They are all really talented musicians, and serious about their gear having changed guitars for every song. I was really digging the instrumentals and there was a heavy bass that really solidified their sound. The tracks played included Raised in the Dark, Safe Passage, Alligator Skin and Give Up The Ghost. They got the crowd jumping and cheering before they finished up with Dreams from their 2019 album release, a fun anthem to end the set with.

Halestorm took the stage and a booming roar came from the crowd. We hear the sexy growly voice of lead vocalist Lzzy ‘Thank you for being a part of our freak family tonight!’ They launch into the track Mz. Hyde from their 2012 studio album release The Strange Case of…

Lzzy Hale is a born Frontwoman, she kept the conversation with the audience going throughout the entire night, introducing the tracks and offering us up stories and positive affirmations, so that every individual in the crowd could relate and have their own personal experiences of the night. ‘Hello! It’s Mz. Hyde‘, Lzzy bellowed as the band launched into a single from their second studio album which was the perfect mix of hard rock horror themes and glam metal. ‘I never imagined being here’ reflected Lzzy on performing in Australia, later in the night she would reminisce about when Halestorm first started back in the 90’s when she was only 13 years old and her younger brother and drummer Arejay was only 10, with their only gigs consisting of bowling alleys and local dive bars. We then heard I Get Off which was the lead single from their self titled album, then the stage flooded with a green light and the room hummed for the intro of Amen which had powerful vocals and some wailing guitar work. We were also treated to a funky duo set with Arejay on drums and Josh on base guitar as the other band members left the stage. Arejay, who originally was wearing a hilariously stylish suit was now down to his singlet and shorts as he was drumming up a storm which lead into a pretty epic drum solo with a larrikin flair that only the talented Arejay could bring with his goofball antics. At one point he pulled out a ridiculously humongous pair of novelty drum sticks and kept playing, while still maintaining a decent sound.

Lzzy and guitarist Joe came back out on stage so the band could play a newer track Black Vultures from the 2018 album release of the same name and Freak Like Me which Lzzy dedicated to all the ladies in the crowd ‘Together let’s make this whole world uncomfortable!’. This was followed by a powerful performance of Chemicals which showed just how tight their sound really is. Lzzy commanded the crowd to throw up their horns, and every soul in the venue complied. ‘Melbourne, you are the fire, what ever is going on in your life, you are what you are waiting for!’ they lead into the track I Am The Fire, and the Forum sparkled from the sea of lighters and lit up phones being held by the audience members. Halestorm exited the stage, leaving the crowd to scream and cheer for an encore. We were rewarded, but not just  by any encore, the most intense and huge encore of the entire year with song after song that stretched late into the night. Lzzy also performed a solo medley on keyboards where she was able to wield the powerful tool of a voice for the track White Dress that ended with Whitney Houston’s I will Always Love You where she nailed those Houston high notes, in her own growly rock style way.

Halestorm called out to Villainy ‘Our brother’s in rock ‘n roll’ to join them on stage for celebratory shots with Lzzy leading the toast ‘Cheers to Australia. Cheers to rock ‘n roll. Cheers to Melbourne and cheers to all of us here tonight!’ the crowd swayed and sang along to the band performing Here’s To Us which crescendoed into a big finish that left the crowd cheering and in some cases (like the ladies standing in front of me) left them with eyes welled with tears. But it was not over yet, after the crowd screamed for what seemed like an eternity, the band ended the night with their well known single I Miss The Misery.

Although the set was now well and truly over, the band members remained on stage continuing to connect with the crowd at the front, while the rest of the herd slowly spilled out back onto the darkened Melbourne Streets. I couldn’t think of a more wholesome way to end the year than by attending a solid live performance by the hardest working band in rock ‘n roll, straight up rock pros Halestorm.

You can check out Halestorm’s 2020 tour dates here and keep up to date with the band on social media.