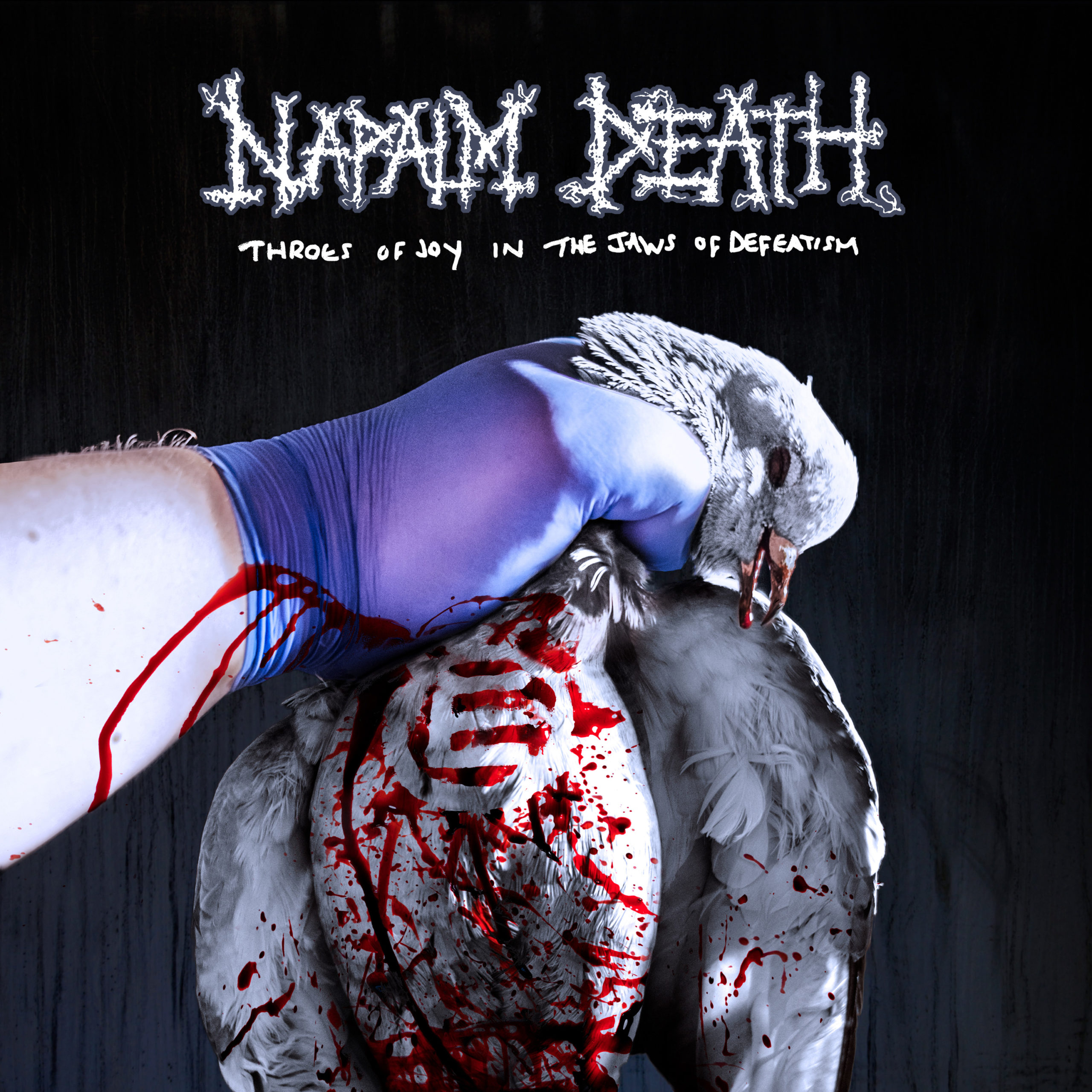 Home MEDIA NAPALM DEATH – ‘Throes of Joy in the Jaws of Defeatism’ Album...

If Donald Trump heard Napalm Death, he’d start tweeting about Antifa, and demand the band be listed as a terrorist organisation, and insist they be banned from entering the USA, or any country where the CIA has overthrown a democratically-elected government in the last 60 years. If that’s not enough reason for you to go buy their new album, then lucky for you, I’ve written an actual review of it.

Napalm Death’s sound has taken some twists and turns over the years, but the last 11 years or so has seen them focus on a mix of punkish rhythms, death metal riffing, dashes of odd industrial experimentation, and grindcore… well, grinding, and it’s resulted in “Time Waits For No Slave,” “Utilitarian” and “Apex Predator… Easy Meat,” three of the best albums of their career. Their latest effort continues in that rich vein, with a few surprises. The opening one-two “Fuck The Factoid” and “Backlash Just Because” are pure ferocity, mixing whirling dervish aggression with unsettling earworms. “Contagion” pushes this idea a bit further, spending most of its 4-minute length in a comfortably fist-pump-friendly pace before a sudden blast burns away whatever complacency has set in. “Zero Gravitas Chamber” has everything you’d want from a hardcore punk song with a big spoonful of death metal dropped into the middle. The title track slaps you awake like a Bond film interrogator with an eerie shouted vocal seeming to shift in and out of time, before leaping for the throat with some absolutely seething grindcore savagery. “Fluxing of the Muscle” does a deep-dive into involuntary headbang groove-metal before launching into a thrash-punk section that somehow twists into an off-time bridge with the decidedly eerie semi-spoken segment.

Then, for a few songs mixed in there, we get… weird. “Joi De Na Pas Vivre” sounds like a classic Napalm Death banger where the guitar parts are played on keyboards, and all the vocals are in French. “Invigorating Clutch” starts with a droning mix of keyboards and those unsettling low-chant vocals we heard on the opening of “Apex Predator,” before shifting into a headbang-friend mid-paced track that stomps its way to a sudden, diffusing echo ending. “Amoral” has a decidedly post-punk feel to its indie-rock chords, surprisingly catchy quiet-verse-big-chorus structure and very danceable beat. And the closer “A Bellyful of Salt and Spleen” builds a foundation of drums and industrial loops, then layers them with surprisingly melodic keyboards and some standout basslines, all topped with Barney exploring some very goth-rock vocals.

Production-wise, if you’ve listened to the last few Napalm Death records, you’ll know what to expect. Their sound-in-trade is intensity all the way, with huge guitars, filthy bass, and slightly mechanised-sounding drums. Barney’s vocals are a real stand-out, pushing out from his trademark bellowing into furious shrieks, almost-bluesy snarls, and baritone chanting when the mood takes him.

At this stage of their career, Napalm Death are pretty much unassailable. They helped invent a genre, pushed its boundaries by seeing what other flavours they could mix in, and have grown it into a sound all of their own. It’s refreshing to see that, when they could relax comfortably atop the grindcore Mount Olympus and lazily rehash the same album every few years (or go for the “crucial album anniversary tour” cash grab), they still push their sound in new and intriguing directions without losing the ferocity and humanism at the core of their sound. Another contender for album of the year.

‘Throes of Joy in the Jaws of Defeatism’ is available now on all major streaming services, in physical form on the official Napalm Death website and you can keep up to date with the band on social media.

MUSIC – THY ART IS MURDER – Announce supports for ‘Life In The Crosshairs”...