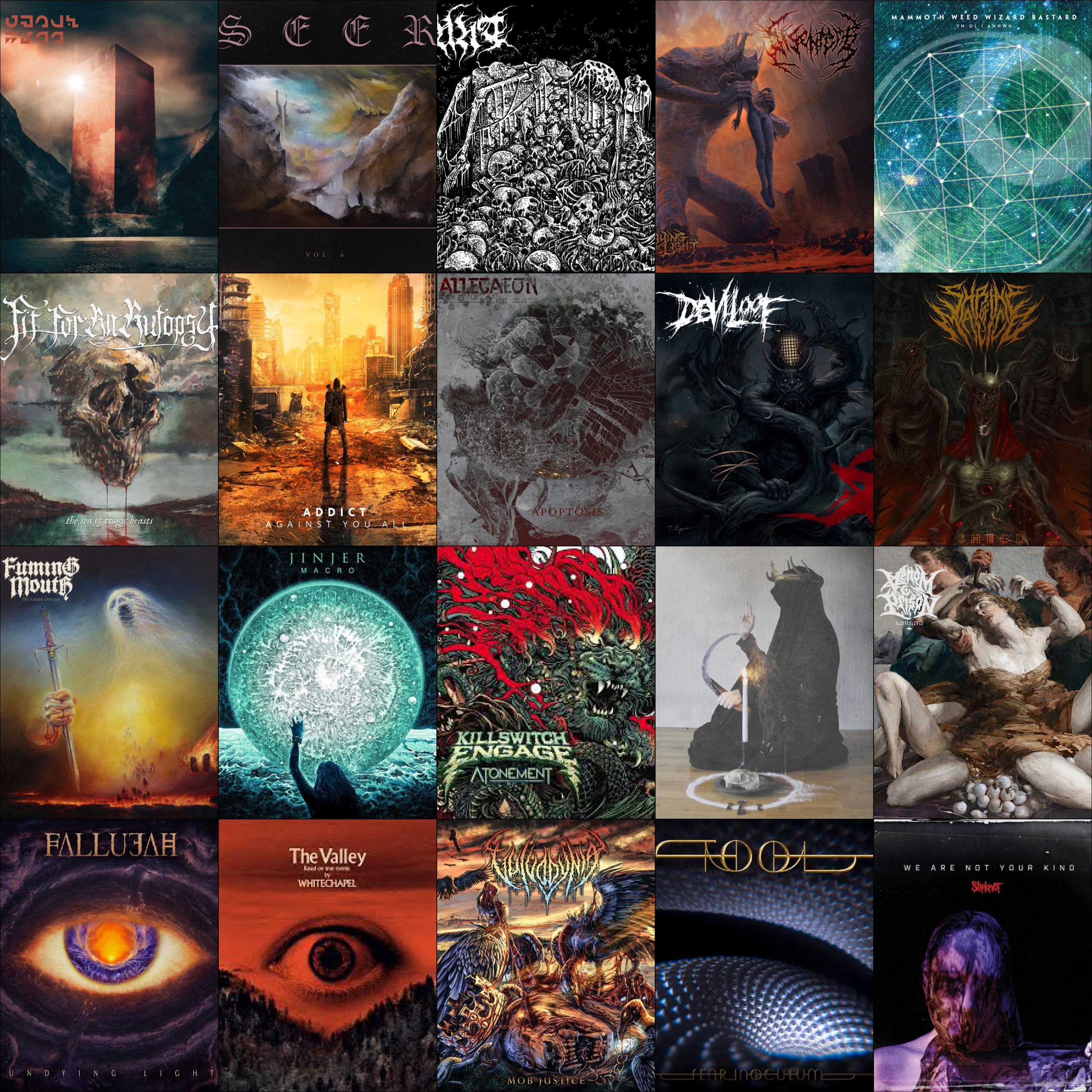 2019 has been a huge year for heavy metal, seeing releases from many fan favourites and break out albums from brutal newcomers.
The Everyday Metal crew came together to create a list of their favourite records for the year.

20. SLIPKNOT – We Are Not Your Kind
Coming in at number 20 is the highly anticipated sixth studio album from Slipknot. Although it doesn’t quite deliver on the “Iowa levels of heavy” that the band expressed in the lead up to its release, it definitely brings some catchy tracks like “Unsainted” with a chorus that gets stuck in your head for days.

19. TOOL – Fear Inoculum
Tool’s first release in 13 years had fans all over the world freaking out. The album is a clear progression for the band, yet is filled with classic Tool vibes.

18. KILLSWITCH ENGAGE – Atonement
Following on from their killer 2016 release Incarnate, Killswitch Engage brought fans a huge 2019 release Atonement. Lead vocalist Jesse Leach pours his heart out on this record and even collaborates with former lead singer Howard Jones on the track “The Signal Fire“.

17. WHITECHAPEL – The Valley
This record was a step in a different direction for Whitechapel, delving deep into the early life of lead singer Phil Bozeman, touching on topics such as mental illness and drug abuse. The record also shows off the huge vocal range of Bozeman, especially on the downtempo track “Hickory Creek“.

16. FUMING MOUTH – The Grand Decent
This album immediately got our attention with the killer artwork from Mariusz Lewandowski. The album then blasts your ears with 12 tracks of brutality. Standout tracks from the record include “Burning Hand” and the title track “The Grand Decent”.

15. DEVILOOF – Oni
Japanese Visual Kei band Deviloof have been solidly releasing J-pop-infused deathcore year after year. On this record we expected them to lean a little harder into the J-pop, yet they did the opposite, delivering a seriously heavy record. You can learn a little more about Deviloof and Visual Kei here.

14. FALLUJAH – Undying Light
This album divided the Everyday Metal crew, some not so keen on the new record and some loving the change in sound brought by new lead singer Antonio Palermo. Stand out tracks include “Dopamine” and “Sanctuary“.

13. FIT FOR AN AUTOPSY – Sea Of Tragic Beasts
Fans had a lot riding on this record, especially after the insanely good 2017 release “The Great Collapse“. This record was a clear progression for the band, embracing the skills of member and legendary producer Will Putney. The album explores big choruses and for us, cements lead singer Joe Bad as one of the best heavy vocalists in the game.

12. SHRINE OF MALICE – Sheol
This is the debut full-length record for the emerging Deathcore band, Shrine of Malice. Even though they are a younger group, they play with the skill and confidence of a more seasoned band. Filled with brutality, the band still makes way for some shredding guitar solos. Definitely a band to keep an eye on.

11. MAMMOTH WEED WIZARD BASTARD – Yn Ol I Annwn
Welsh for “Return to the Underworld” this record is filled with sci-fi doom metal goodness. The final in the band’s trilogy of records and definitely the strongest release. Check out the full album review here.

10. JINJER – Macro
This band has totally dominated 2019, selling out shows across the globe, so it comes as no surprise that they are in our top ten records of the year. This release expands on the band’s signature sound bringing a new level of groove and refinement. Check out our interview with Jinjer bassist Eugene here.

9. THIS GIFT IS A CURSE – A Throne Of Ash
This album is unforgiving, bludgeoning you from beginning to end with heavy vocals and riffs layered with distortion. This album is a must for any heavy music fan.

8. ADDICT – Against You All
Set against a post-apocalyptic backdrop, this band from Russia brings you a record filled with old school death metal vibes and even features an instrumental track with some serious shredding from guest guitarist Egor Averyanov.

7. VULVODYNIA – Mob Justice
This is the fourth outing for the South African death slam juggernaut and a huge step forward for the band. Mob Justice still features the bone-crushing slam you have come to love, yet now includes guitar solos and some killer guest vocal spots. Check out our Interview with Vulvodynia here and our coverage of their sold-out Melbourne show here.

6. ALLEGAEON – Apoptosis
An Everyday Metal crew favourite, filled with epic science metal goodness and mixed with some spontaneous flamenco guitar. Lead singer Riley McShane really flexes his vocal cords on this record, moving from screams to death growls and harmony. Check out our coverage of Allegaeon when they supported Ne Obliviscaris on the Painted Progression tour.

5. VENOM PRISON – Samsara
Venom Prison is known for being a touring monster, melting peoples faces all over the globe. It’s hard to believe that this band is only two albums into their career as their sound is refined and skillfully delivered. We are looking forward to seeing them when they hit Australian shores in 2020.

4. MUNT – Towards Extinction
This is some black grinding death from our home town of Melbourne. This four-track offering takes you on a bleak journey into mans self-induced destruction. MUNT put on a hell of a live show and we had the pleasure of covering the Melbourne leg of their Towards Extinction tour. Check out their antics here.

3. SEER – Vol: 6
Our favourite Doom Metal release of 2019! This album has everything that you want in a doom record, a strong mix of clean and heavy vocals, brooding buildups and self indulgently long guitar solos.

2. DISENTOMB – The Decaying Light
This band hails from Brisbane Australia and this is their first release since 2014’s “Misery“. It brings you a mature version of their extreme death metal. The band has clearly taken their time to craft the songs on this record, layering them with ferocious riffs and intense vocals. Check out our coverage of Disentomb’s Melbourne show here.

1.GRAVEMIND – Conduit
It was unanimous amongst the Everyday Metal crew that GRAVEMIND’s debut record “Conduit” is our number one pick for 2019. This band came out of the gates with one of the best debut releases we have ever seen. When you listen to the diverse yet cohesive sound presented on this record you cannot believe it’s their first full-length record. Gravemind have backed up this release with some heavy touring and with their huge stage presence, there is no doubt that Gravemind will dominate in 2020.
Check out our coverage of GRAVEMIND as part of the Good Things Festival here.

I AM MOTHER – BEHIND THE ROBOT