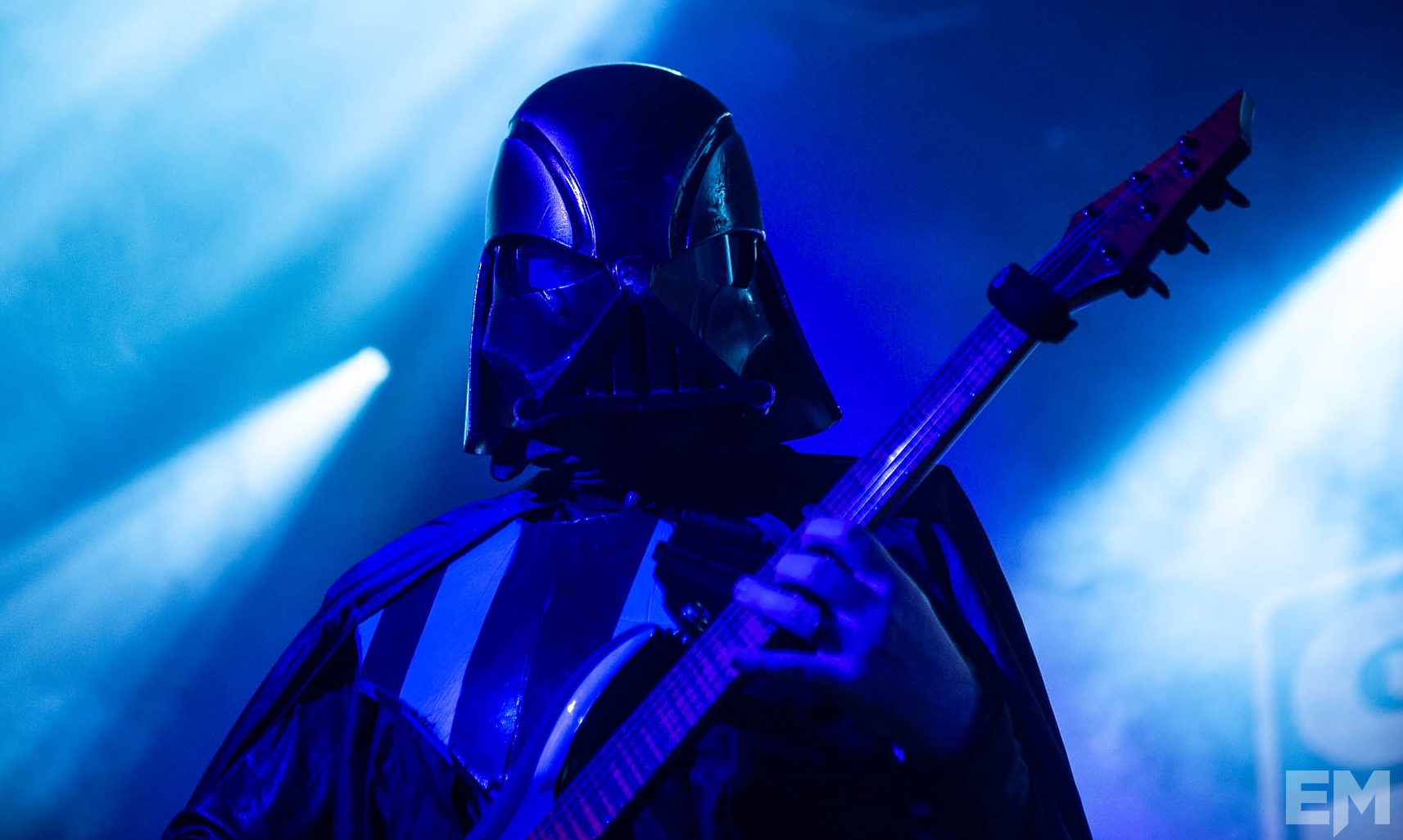 On Sunday night Mitch and I jumped into the Everyday Metal Millennium Falcon and in only twelve parsecs we arrived at 170 Russel to see Galactic Empire perform in their first-ever Australian tour. If you haven’t heard of them before then allow me to invite you to the dark side. It was a long time ago (not really that long ago) in a galaxy far, far away (not really that far) that five of the most feared villains in the Star Wars franchise got together to perform metal covers of the most recognizable scores in history. It’s a pretty niche mashup so if you can’t imagine who attended this event, I want you to picture a Venn diagram, in one circle you have people who live in Melbourne, in another circle you have people that love Star Wars and in the last circle you have people who love progressive metal. The overlap? That was the audience…. just a bunch of scruffy-looking nerf herders.

The atmosphere was set as we walked down the stairs into the basement venue with an on-stage light show and Battles playing over the speakers. The few that came early were also rewarded with a couple of phenomenal progressive metal support acts, Melbourne’s own The Omnific and I Built The Sky. The Omnific are a young trio consisting of a drummer and two bassists. Although not a typical set-up they still managed to create a varied, yet balanced sound which was created with heavy drums and delicately intricate, but bold bass notes. Jerome was an absolute animal on the drums, and it was amazing to watch Toby and Matt work through the six guitars they had on stage with such technical proficiency. The sound that The Omnific achieved was beautiful, utterly beautiful. Toby thanked the crowd for coming out early and braving the wet weather ‘you are real troopers or more like, Storm Troopers’, a cheesy but appropriate joke for the evening.

I Built The Sky was on next, also a three-piece band and also progressive metal but with some old school rock/metal influences. What I found out later, was that I Built The Sky was actually a solo (or more like Han Solo – sorry) project from the brainchild of a Melbourne local by the name of Ro. Everything that you would hear on their recordings are all done by Ro which I must say is impressive. For live gigs and tours, however, Ro invites a drummer and bassist to perform with him while he plays the guitar and takes the lead with some fat and heavy guitar riffs. I was stoked to see that the drummer joining him on stage was none other than Jerome from The Omnific, which was so fitting as he is bullshittly talented (I’m pretty sure that’s the technical term for it). Bassist Sam thrashed and headbanged on stage, which brought some energy and intensity to the set. The new album ‘The Zenith Rise’ is out now.

Five formidable figures marched onto the stage. We saw Boba Fett on drums (Boba Sett), a Stormtrooper on bass (Bass Commander) and Kylo Ren (Kyle Ren), a Red Guard and Darth Vader on guitars. We heard the familiar sound effect of Darth Vader’s deep and painful breath before the Galactic Empire kicked off with a metal type ‘Star Wars (Main Title)’ which is known as the main theme song performed by the London Symphony Orchestra. If you don’t think this kind of thing would make sense then I find your lack of faith disturbing, metal in Star Wars is rad and there is something about a Stormtrooper strumming on a headless bass guitar that just works for me. This band also combines some very strong nerd culture, the members are into sci fi, we know that, but they are also music nerds which you can tell by the particular guitars they used.

This was not a normal gig either, Galactic Empire is more of an experience, one which you couldn’t get just anywhere. Apart from the costumes, set and light show, they also worked in a short skit which involved Darth Vader, the Force Choke and an audience member who turned out to be Rebel scum and Kylo Ren also got some much-needed discipline from his Granddaddy. Even while we joyfully bopped and banged around to a heavy rendition of the happy dancey song known as ‘Cantina Band’, a Death Star beach ball the size of well, a Death Star, circulated the audience which smashed people in Alderaan places (I swear that’s the last one). If you also thought the ‘Imperial Death March’ sounded menacing before, then you haven’t heard it being performed by a Darth Vader on lead guitar. This was a show not to be missed!

Galactic Empire are continuing their tour across Australia, you can check out the tour dates and get your tickets here and you can stay up to date with the band on social media.

INTERVIEW – FEELING THEIR SPIRIT – A DAY WITH NO FUN AT ALL