We are extremely happy to offer our very first EVERYDAY METAL tee.
Featuring a huge SUPPORT LOCAL HEAVY METAL back print, our shirts are designed in house and printed by the very talented Redwood Press on 100% combed cotton.

Check out our behind the scenes video below and you can get your tee in our online store.

ALLEGAEON are back with the track “Into Embers” the first taste of new music since 2019’s Apoptosis.
Into Embers is taken from their upcoming sixth studio album DAMNUM, the new track features everything that we love about ALLEGAEON, huge drums, blistering guitar solos, guttural growls and soring clean vocals from lead vocalist Riley and bassist Brandon.

“This song embodies the dark and fitful nature of this album by bringing to the table elements of ourselves as a band and as individual musicians that we have been waiting to share with you all for a long, long time. As always, we are excited for our listeners to join us as we step forward into new landscapes – continuing to push the boundaries of our music further and further – and we are eager to experience the unveiling of DAMNUM together over these next few months.” – Riley Mcshane – lead vocals

DAMNUM is out February 25, 2022, via Metal Blade Records, get your pre-orders and merch here. You can keep up to date with ALLEGAEON on social media:

Check out our coverage of ALLEGAEON as they support Ne Obliviscaris for the Painted Progression Tour alongside Caligula’s Horse, Beyond Creation, Allegaeon and Rivers Of Nihil.

You can see more from Allegaeon on the official Metal Blade Records youtube channel.

RIVERS OF NIHIL‘s latest album ‘The Work‘ has been out for a few weeks now and is shaping up to be one of the best releases of the year. As you all know the last two years have been hard on the live music industry and it is great to see a band push through and produce some amazing releases.

The Work is an experimental musical journey, seamlessly moving between genres and a great example of this is the track and video for ‘The Void from Which No Sound Escapes’.

‘The Void from Which No Sound Escapes’ is a song that was put together pretty early in the writing process for ‘The Work’. It features some familiar sounds that people have come to expect from our band, while also highlighting some new sounds and textures that we’ve never experimented with before.” – Brody Uttley – Lead Guitar

Directed by David Brodsky and Allison Woest for MyGoodEye and you can view the video for ‘The Void from ‘Which No Sound Escapes’ below. The Work is out now via Metal Blade records get your hands on merch here.

Check out our 2018 interview with bassist Adam Biggs here, also see our coverage of RIVERS OF NIHIL’s first appearance in Australia as part of the Painted Progression Tour supporting Ne Obliviscaris.

Cover shot – FIR FOR AN AUTOPSY

FIT FOR AN AUTOPSY have dropped ‘Far From Heaven‘ the first taste of new music taken from their upcoming record Oh What The Future Holds.

“A worthy introduction to premiere the album, we pick up where we left off creatively from our last release. Although there are more drastic dynamic turns to come, “Far From Heaven” delivers from a more simplistic and primal place.

Lyrically, this record will take you further into internal turmoil and chaos than we have gone before, partially due to isolation but also as an overstated reflection on existence itself.

This song is much more a literal and grounded representation of our continued frustration with institutions and class gaps that exist in all facets of society. The powerful video by Eric Richter is a thematic visual counterpart to the inherent dark nature of subject” – FIT FOR AN AUTOPSY

The new track is accompanied by a video directed and Edited by Eric Richter, with audio produced, engineered and mixed by Will Putney Mastered by Mike Kalajian

Oh What The Future Holds will release worldwide on the 14th of January 2022 via Nuclear Blast Records, get your hands on pre-orders here.

View the video for Far From Heaven below and keep up to date with the band on social media. You can also check our previous interview with Fit For An Autopsy guitarist Tim Howley here.

You can see more from Fit For An Autopsy on the official Nuclear Blast YouTube channel.

As part of this release, the band have announced the addition of a new vocalist, Daniel Macdonald (Wormtongue).

INDOCTRINATED is Mixed and mastered by Tom Cadden at Violent Sound Produced, engineered, co-mixed and tracked by Patrick Haas and is accompanied by a new music video by Nicholas VanVidler at NJV Media.

PROSELYTISM drops worldwide on October 29th, 2021 via EVP Recordings.
Check out the video for INDOCTRINATED below and keep up to date with ZEOLITE on social media.

You can see more from ZEOLITE on their official YouTube channel.

Don’t forget to check out our previous coverage of ZEOLITE supporting DISENTOMB at the Northcote Social Club and VULVODYNIA at The Workers Club.

RIVERS OF NIHIL have dropped a video teasing the release of their new album ‘The Work‘.
This is the first full release since 2018’s ‘Where Owls Know My Name‘ heralded as one of the best metal albums of all time for its technical excellence and use of unconventional metal instruments such as saxophone.

‘The Work’ premiere is scheduled for Tuesday, July 27th at 09:00am PDT / 12:00pm EDT. like many fans, the EM crew is extremely excited to see what RIVERS OF NIHIL have in store with the new record.

Check out our interview with bassist Adam Biggs here, also see our coverage of RIVERS OF NIHIL’s first appearance in Australia as part of the Painted Progression Tour supporting Ne Obliviscaris. 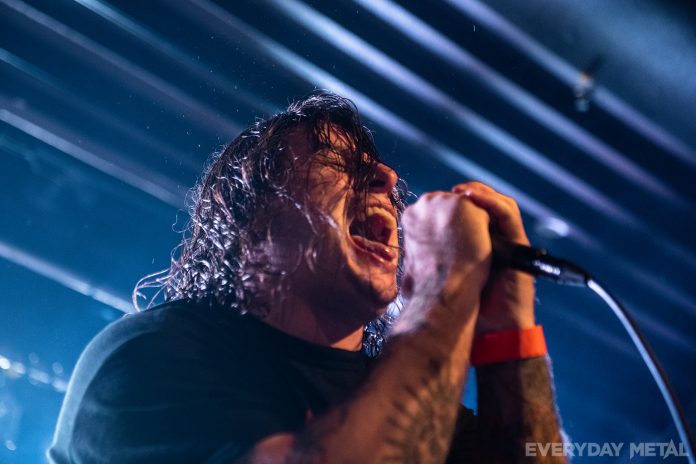 On Friday the 9th of July, King Parrot kicked off their 10 Year Anniversary Tour at Maxx Watts in their hometown of Melbourne. This gargantuan tour will head all around Australia stretching all the way until December later this year. Considering it has been a while since EM have had the privilege of seeing KP in the flesh at a live gig (almost forgot what these were) we were more than stoked for a night out of great metal, so the 5 band line up headlined by the now metal veterans King Parrot definitely helped in making up for some lost time. Special guests for the night included Nicolas Cage Fighter, Womb To Tomb, Hidden Intent, and Choof.
This ragtag line-up of bogan metalheads all helped in creating a ‘no shirt, no shoes, no worries’ kinda vibe for the evening.

Opening act Choof, the 4 piece grind from hell, successfully warmed up our eardrums with a mix of grind, thrash and groovy sludge.

Hidden Intent, a 3 piece band from Adelaide gave us a face-full of old school thrash metal vibes, some fat and tasty guitar solos.

Next up was Womb To Tomb, birthed out of Frankston and featuring Matt Rizzo on drums (former member of King Parrot). With their super energetic lead vocalist and extreme metal and thrashy instrumentals, the crowd got thoroughly pumped.

Nicolas Cage Fighter were the last support act for the night, and apart from a solidly awesome band name, this band from Ballarat also brought with them a kick-ass set of solid metalcore. The crowd really started to get back into the swing of things and got themselves ready for the main event.

Finally, King Parrot arrived and launched straight into their classic on-stage trash banter and clown-like antics which although they are well known for, also back themselves with a huge sound that boasts a technical proficiency of a band with more than 10 years’ experience. Although their drummer Toddy couldn’t be there, they still gave it their all and gave the audience a show they could really get involved in and remember for years to come. In an impressive feat, Youngy got the entire audience to shut the fuck up while Ari “Mr White” on guitar cracked open a can of beer into the lead mic making a surprisingly crisp psssscht sound in honour of the band member that couldn’t join them on stage.

10 years is a tremendous milestone for a metal band and they marked it with an incredible night that left us all sore and satisfied.

Massive thanks to lads in KING PARROT and for having us and a special shout out to the good people at Cult Etiquette.

Check out the rest of the tour dates here and stay up to date with the bands on their respective social media.

Enigmatic rock collective SLEEP TOKEN have released their latest single ‘Alkaline‘. This is the first look at new music since their debut album Sundowning, hailed as of the best records of 2019.

Alkaline is taken from their upcoming album ‘This Place Will Become Your Tomb‘ and is accompanied by a cinematic video.

Check out the video below and pre-order the new album here and stay up to date with SLEEP TOKEN on social media.

You can see more from SLEEP TOKEN on their official YouTube channel.

Special thanks to Collision Course PR. 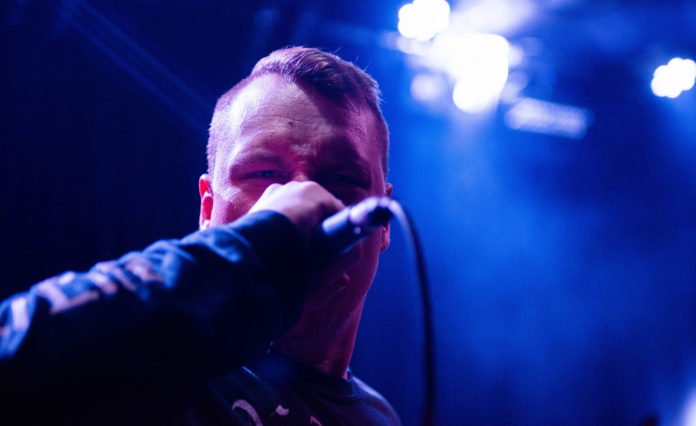 DISENTOMB are hitting the road in September bringing their signature brutal death metal to Brisbane, Sydney, Adelaide and Melbourne!

Presented by EVP Recordings, DISEBTOMB will be supported by ZEOLITE and FREEDOM OF FEAR. Check out the dates below, get your tickets here and keep up to date on social media.

Don’t forget to check out our previous coverage of DISENTOMB for their The Decaying Light headline tour supported by Whoretopsy, Zeolite and Odiusembowel.

You can see more from DISEMTOMB on the official Unique Leader Records YouTube channel.

If you are like us and live in the perpetually locked-down state of Victoria you would have missed BURIAL PIT on their Subhuman Scum headline tour. But lucky for us and fans all over the world, BURIAL PIT has uploaded the full video of their album live stream for your viewing pleasure.

Check out the video below, get your hands on the new record here and follow the band on social media.

You can see more on the BLIGHTTOWN official YouTube channel.

Cover shot – TO THE GRAVE

Sydney based deathcore band TO THE GRAVE are melting faces with their latest track and video ‘Death By A Thousand Cuts‘ taken from their album Epilogue.

This song is both an introspective response to appeals to futility from those unwilling to act and a depiction of the looming collapse of systematic slaughter. We each have a part to play in how the world ends up and this song analyzes both sides of the blood-stained coin. – To The Grave

To The Grave recently announced the Epilogue Tour for August with special guests Earth Caller.

Due to demand, they have added extra shows in Sydney and Melbourne.
If you missed out on the first round, get in quick as the new tickets won’t last long!

Get your tickets now via Destroy All Lines and follow TO THE GRAVE on social media.

You can also check out our coverage of TO THE GRAVE supporting VULVODYNIA on their first Australian Tour.

You can see more from TO THE GRAVE on the official Unique Leader YouTube channel.

Special thanks to Maric Media

VIDEO – METAL FROM THE DIRT: Inside the Navajo Reservation’s DIY Heavy-Metal Scene