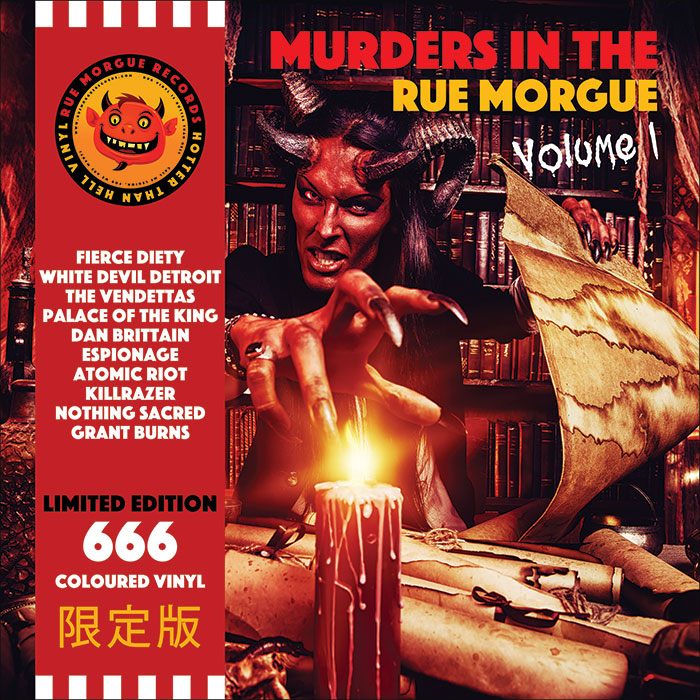 Samplers, compilations, mixtapes… these come to us in all sorts of ways. You might get one in the mail along with an order from a label. You might grab one from the merch table at a gig (remember those? I remember those…). That hottie in maths might have made you one and scrawled your name on it with a sharpie back in ’98. You might even purchase one, either to support a band or a label, or as part of a fundraiser for one cause or another. And usually, you’ll listen to it once or twice, pick out which newly-discovered bands you love, and it’ll later end up scratched to hell, lost under the passenger seat, or melted beyond recognition when your housemate’s water heater explodes. But that’s another story.

It’s with the inherently pick-the-bits-you-like-and-then-chuck-it approach in mind that I popped on the first offering from locals Rue Morgue Records. I recognised a couple of names from the back, all guitar-heavy acts I’d heard of but never actually heard. I could give a detailed rundown of every track on this, but that’d rob you of the fun of finding out for yourself. I’ll offer a couple of observations about a few choice selections though:

The heading on the back cover addressing this musical love-letter anthology to the classic-era members of KISS is a nice touch, and tells you a where a lot of the musical heart, soul and era-nostalgia of this release lies. With the exception of Killrazer and the constantly-shredding instrumental prog-metal of Grant Burns, you could take any one of these bands, play them on the car stereo in a scene from Detroit Rock City, and it wouldn’t sound out of place.

Overall, this is a compilation that holds together pretty cohesively – nothing sounds wildly out-of-place (again, except Killrazer), but no two bands sound the same. If the heavier end of mainstream rock, especially the sounds of the mid-70s to mid-80s is your bread and cocaine-flavoured butter, then you’ll find a lot to like on this release. There’s some stellar musicianship, high soprano vocals of the leather-pants-tighter-than-footy-shorts variety, and plenty of worship at the altar of Gene and Paul. I’ll be honest – I got bored with this type of hard-rock / PG-rated metal around 1992 (when I discovered Slayer), but if you like it riff-tacular, not too aggro, and wearing the KISS / Zeppelin / Aerosmith hearts on the sleeves, give this one a look.

You can get your hands on “Murders in the Rue Morgue Vol 1” on their official website and keep up to date with Rue Morgue Records on social media.