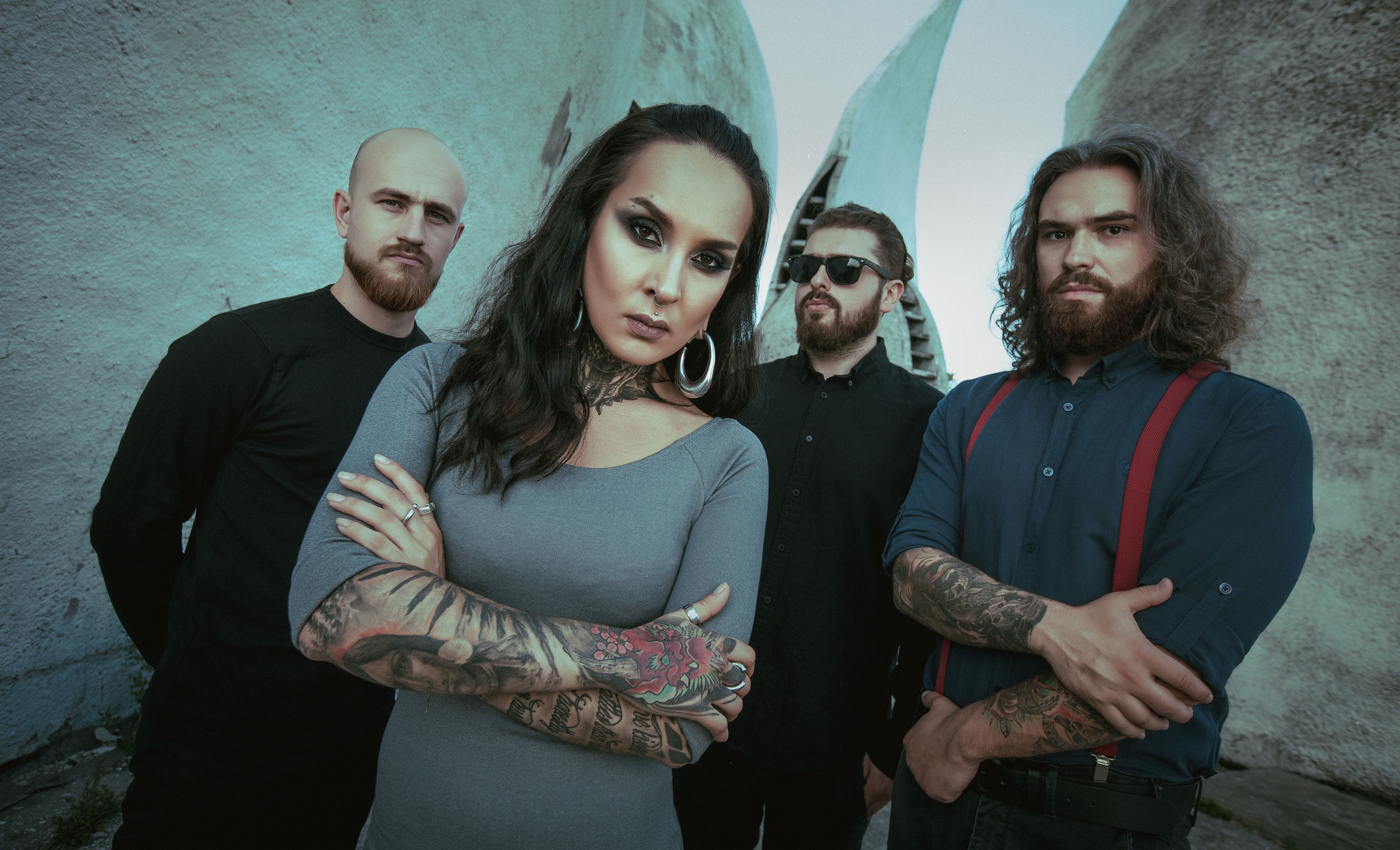 After playing a sold-out show in South Carolina, Jinjer’s bassist Eugene Abdiukhanov chats with EM’s Mitch about the release of their fourth studio album “Macro” this October, their North America and Europe tour and on their upcoming Australian tour in 2020.

M: Eugene hi, it’s Mitch from Everyday Metal in Melbourne Australia. How are you going?

M: That’s good to hear. So, you guys are in the middle of a pretty huge tour at the moment are there any standouts so far?

E: It’s very hard to pick because out of this 15, 16 shows. I think at least 13 were sold out. All of them can be called standouts because it’s just fantastic everywhere.

M: You guys have been doing a lot of touring around the world. Where do you think is your biggest fan base at the moment?

E: It’s hard to say. We are about 1/3 done of the North American tour. Looking at how good things are here I may say that we’ve got the biggest fan base in the United States and Canada. But on the other hand, I am sure that after the North American part of the tour we’ll be back in Europe and it will be the same, fun and exciting. So now its USA but in two months it will be Europe.

M: With the bands increasingly heavy touring schedule, how did you find the time to write and record the new album Macro?

E: Well, a lot of people keep asking me about this, I don’t know, we just sat down at home in the studio and wrote songs. Nothing special. It took us the whole spring. We had a few gigs here and there but most of the time we were at home writing new music. This is how it happened. I think in some way the fact that we composed and recorded Micro EP last year, last September, implants the whole creative process. In the way that it accelerated the process itself and for us it was much easier to write songs for Macro album than it was for us to write songs for Micro EP, if you understand what I mean.

M: Have you been playing any new material from Macro for you live shows?

E: Yeh we are playing two songs from the upcoming album. One of them is ‘Judgment and Punishment’ which was released as the first single a month ago or something like this. And we are also playing an unreleased song called ‘Retrospection’. By the end of the tour when the full album will be out we will add least one more song on.

M: What has been the fan response to the new tracks being played live for the first time?

E: Nice. Very nice. Especially ‘Judgement and Punishment’ because they know this piece of music, this song. Yeh but with the other song performed live for the first time, definitely what I see from my perspective on the stage is that it gets peoples attention and by judging by their reaction after, is good.

M: The track ‘Judgement and Punishment’ has a reggae vibe, does this genre inspire the way you write music?

E: Well yeah, actually we have tons of inspirations, so it’s not only reggae but we decided with this song, to do something like this. But it’s not the first time we added this kind of reggae elements in our songs, we already had it in previous records. People constantly talk about this reggae, but we already did it before, I don’t know why it makes people so surprised.

M: Haha, I definitely picked up on aspects of it in previous releases, but I think it was the way it was nicely placed in the album that caught my attention. Because you have real hard-hitting songs at the start then you have this nice little groovy bit, so I feel like it’s a nicely rounded in the way the songs progress on the album.

E: Thanks, great to hear this. Have you listened to the album already?

E: Oh, so you kinda have the picture, yeah. Actually, I have to admit that probably this is the first time that we, all the band, all four people can be really proud and happy about every single note performed and every single word sang, so [Macro] is definitely something special for us.

M: The album is really progressive, was this an intentional move?

E: We never did it intentionally. Everything we play comes very naturally. It’s not like we try to tune ourselves, try to make ourselves play something technical or play something progressive, no, it just comes, it comes in a very natural way and we play it. But at the same time, we have a lot of pieces, a lot of parts of the songs which are groovy.

M: I like the groovy aspects, and you have stand out songs, the new single of course, but the album itself is really cohesive. The groove to it…. it’s very cool.

E: Thanks man. I am really happy to hear what you are saying now. Thank you.

M: Is there an overall message to Macro?

E: I think a lot of global aspects, those which matter for everyone on the planet. In this way there is a message and the album is called Macro like giving a hint we are going to talk about global things. But at the same time there are a few songs which are to the side of the main message, so I cannot call this album a concept album. But there is definitely a core message.

M: The references to the environment do shine through on the album. So, I am curious about the metal music scene in the Ukraine, how is it for you back home.

E: Metal music is very underground in the Ukraine; we don’t have enough metal fans to support this scene. In a country with a population of about 40 million people, you can play 6, maximum 7 shows and that’s really few. All this time that I have been playing music, I have seen so many good bands who played, they had fans, but eventually they just broke up because there is nowhere to grow in this country. And this is a problem.

M: Well you are coming to Australia soon for the first time and we have a lot of metal fans here. Tickets have already been released for the tour in 2020 and the sales have been impressive.

E: I actually had no idea that it’s been selling so fast, because I’m in the middle of this America tour, it’s hard to keep an eye on everything. This is good news, definitely good news! I’m absolutely stoked, it’s hard to express how much excited I am. Australia is so far, it’s the last continent we haven’t played and now it’s happening and it’s like, you know, real. We have been able to play all around the world and finally we are coming to your side. I know how many fans there are who have been waiting for us for years and finally we have a chance to satisfy them. It’s cool.

M: When the show was announced your fans here were really excited, but also about the VIP meet.

E: We always give fans a chance to meet us. When we were a smaller band it was way easier to meet fans, we could just show up after the show because there was let’s just say 100 people in a small bar. We play the gig then just hang out with people. Now things are getting bigger, for example, we just played a show for 800 people, a sold-out gig, yeah. We can’t just show up and just shake everybody’s hands, because it would take the whole night to shake everybody’s hands. But we do need to communicate with fans especially if we’ve come first time. It’s why I think it’s a good idea to provide them with an opportunity to get this VIP thing.

M: Are you looking to do anything in your free time while you are in Australia?

E: Of course, I would like to check out the whole nature thing. Australia, I think is most know for its nature and has animals that you could never see anywhere else. This is definitely something we would like to do.

M: You know here in Victoria there are places where you can hug a koala.

E: I cannot wait for this!

M: Thank you so much for taking the time out to chat with me today, I appreciate how busy you all are at the moment.

E: Thank you very much. It was quite fun to do the interview, I also enjoyed it

M: Okay, and I will see you next year!

Jinjer’s new album Macro will be out on the 25th of October you can pre-order it here, you can catch them on their current North American Tour here, get your Australia tour tickets here and stay up to date with the band on social media