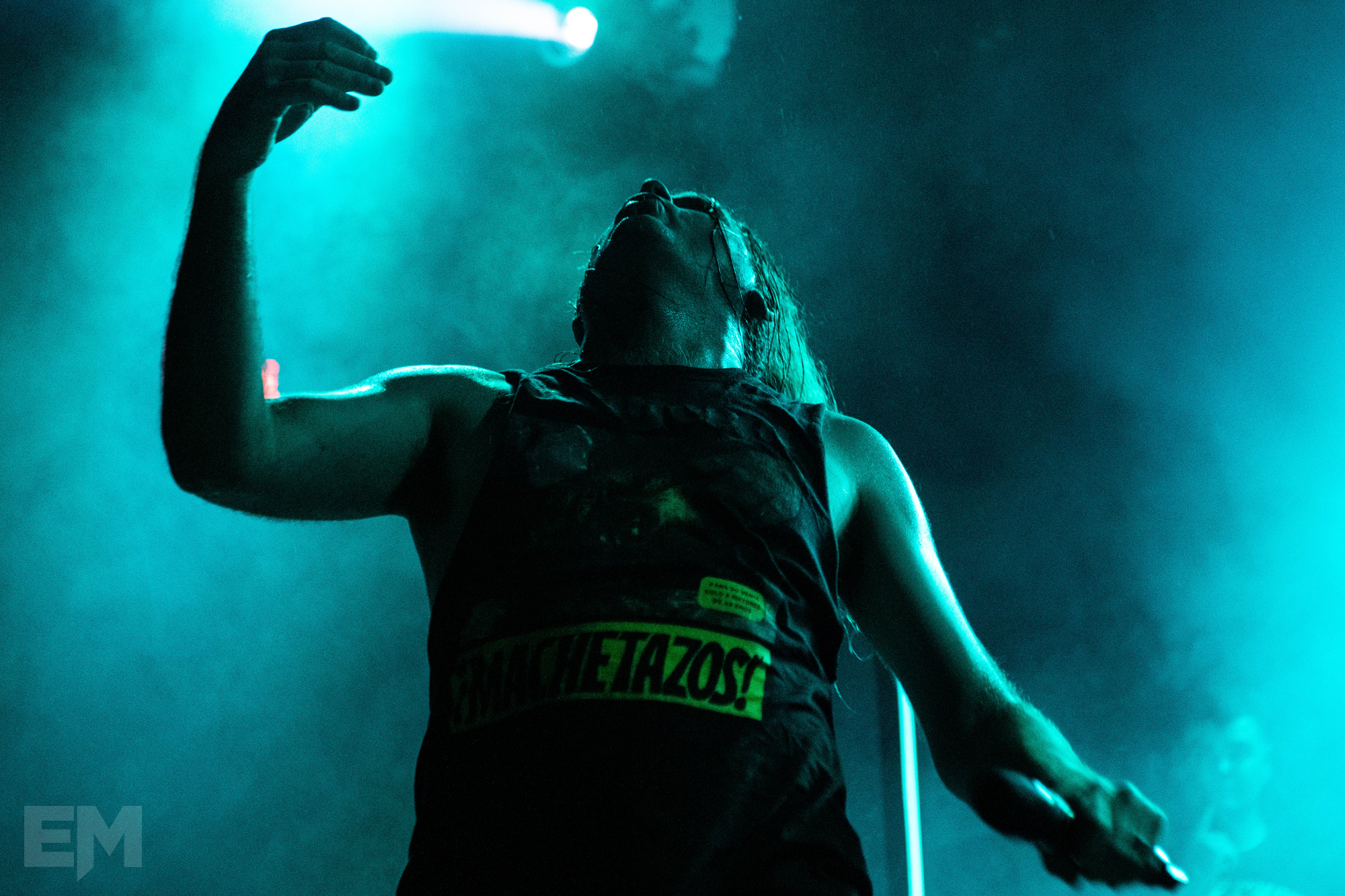 Nothing gets you over the hump quite like some midweek metal at Max Watts in Melbourne’s city centre. Everyday Metal braved the recent spout of shitty weather to head down Swanston Street and get in line with the other keen metal fans to see the the sold out event of Cattle Decapitation’s Australian Tour with Revocation and special guest, Remains.

We rushed down the stairs and were greeted with a dense smoke as the Melbourne local band Remains blasted us with the first track from their set. The venue was quickly filling, so I found myself a good spot with a view and settled in to enjoy the old school metal feels of this newly formed grindcore supergroup with their short but savage tracks. They kept a really fun pace and I, and the crowd were enjoying it thoroughly.

The members of Revocation immediately scattered around the stage to ensure that their instruments were set up and tuned correctly so that we could experience their very technical metal in all it’s proficient glory. This took a while, but once they started playing I understood why it was necessary, and yes, it was definitely worth it. The first track began with a slow sci-fi style intro until they went ballistic with some fast and complicated riffs. Then it got a little doomy and both guitarists threw their growly vocals back and forth between them until they sang in unison creating a beastly sound. Each track took us on an in depth journey of all kinds of metal stylings, and just as soon as you thought the song was going to completely go off the rails, they would pull the reins back with masterful control. Lead vocalist and guitarist David Davidson leaned into the mic ‘What the fuck is up you sick cunts!’, David being another American who loves our bizarre aussie coloquialisms then said ‘We’re not here to fuck spiders. You are not here to fuck spiders either. So I wanna see a bunch of unfucked spiders, hahaha!’. They played some older tracks from earlier albums including Communion which David said was ‘the fastest shit we got’ as he conducted his final circle pit. I enjoyed watching the crowd get fucked up during this set and also enjoyed the wailing retro guitar solos that were wedged between the audible mayhem.

I Looked down on the crowd again and I couldn’t see a single space that wasn’t already occupied by a human body. This was indeed a sold out show. The stage was drenched in red light as four figures slowly made their entrance to the crowd, and only moments later, a roar of approval rose up as Travis Ryan lead singer of Cattle Decapitation entered the stage. Without hesitation, they launched right into it their first track bludgeoned our ears and igniting all our senses, this is exactly what we came for.
I’m always impressed with veteran bands like Cattle Decapitation that have been on the scene for decades, their performance is never lacking and we are definitely not left wanting.
‘It’s good to be back. You guys are fucking awesome!’ Cattle Decapitation made sure to give a shout out to their mates King Parrot which got a cheer from the Melbourne audience (of course, we love our King Parrot). The night was over but we all left very satisfied and ready to tackle the rest of the shitty mundane week.

Cattle Decapitation are celebrating 24 years of melting faces and are touring in celebration of their 10th studio album “Death Atlas“.