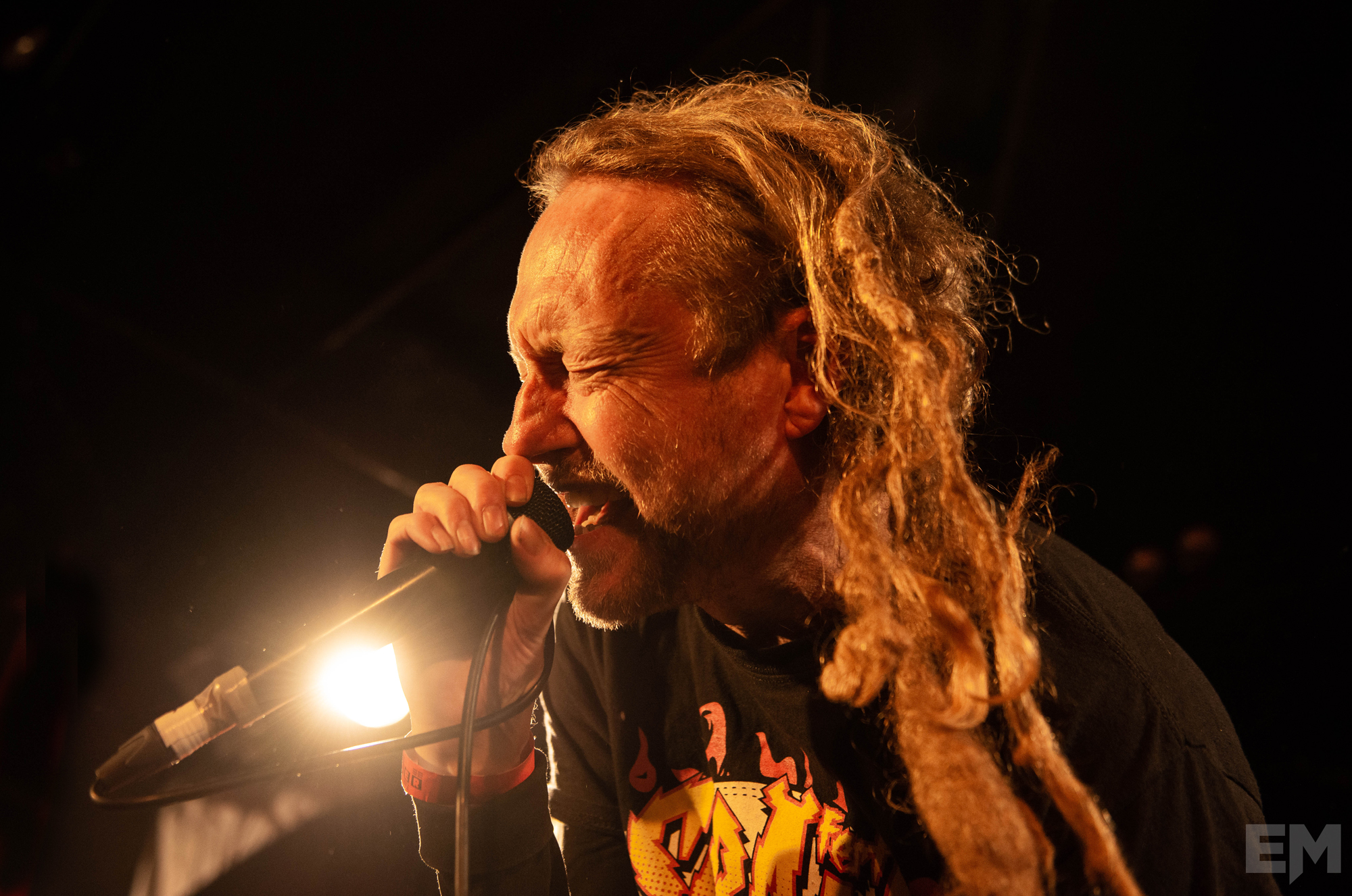 Australian Music T-Shirt Day aka Friday 15th November 2019, I battled the hell that is parking in Richmond to successfully make my way into The Corner Hotel, conveniently to watch some home-grown talent make some noise at me. Tonight’s headliner is Frenzal Rhomb, supported by Von Stache and SUDS.

Gracing the stage to begin our night of rebellious punk rock is SUDS, a 3-piece band consisting of Dan Beck, Jesse Sewell and Johnny “JB” Barrington (who claimed to be from regional Australia, and when asked how regional, they said Sydney, which got a good laugh). They opened their set by informing us that it’s Aus Music T-Shirt day and not Aus Band T-Shirt day because that’s not inclusive and we don’t want to offend anyone. Very thoughtful of them! Now I’ll be perfectly honest, I fell in love with them from the first riff of their first song, it was super groovy, gritty and just a lot of fun and that held up throughout the whole set. During the show there was some quality banter and good laughs in between some even more quality songs. In the words of the lead guitarist/singer JB “Just when you thought you couldn’t deal with anymore issues, you came to a show with 3 punk bands” and then they invited a lovely woman to join them for the songs The Pub With No Fear and TRUMPauline, during which JB made his way around the stage getting his groove on which was a blast to watch. Running a little behind, they powered through the rest of the set. Overall a quality set, I’d recommend catching SUDS sometime soon.

Next up is Von Stache who described themselves on social media as “guitars, drums and angst” and boy-howdy ain’t that the truth! They produce a very house party punk vibe with very rough (in a good way) vocals and very aggressively fast guitars, phat bass and hard/loud drums. Von Stache are a 3-piece female fronted Melbourne party punk band made up of Saspot, Slick and Sofi. During their set I was quite distracted at one point by a moth getting around the stage who seemed to favour singer/guitarist Saspot and after one their songs she made a mention of the moth and later even dedicated a song to it. Musically their transitions between songs were seamless and at points it took me a moment to realise they were playing and entirely different song. Coming into the close of their set they played a song called Pissing In The Wind, and not pissing on their stairs, which Saspot said referencing a story she told earlier in the set about recently being a little intoxicated. They also played a song which was dedicated to all those who played and got ganged up on in 007 Golden Eye on Nintendo 64. Catch them in a pub or club near you ASAP!

To round out a short night, we finally get to Sydney stoner punks Frenzal Rhomb. At this point the venue was packed, people where pushing to the front and “FRENZAL” chants bellowed throughout the band room. Entering the stage to Rain by Dragon, guitarist Lindsay rocked in, in is Hi-Vis High Tea vest that the band did a limited run of and began to play along to the song blasting through the system, shortly joined by drummer Gordy. Once they finished, Jason piped up to say that he’d told them not to go on to any songs that are better than theirs. They opened the set with Richer Than You from their first EP (in 1994) called Dick Sandwich to which Jason said he expected big things but didn’t get that. Immediately and consistently there was crowd surfers and a push-pit, which is to be expected at a stoner punk rock show. Next, they played Bird Attack and I’m pretty sure the venue almost blew up, the audience, myself included, were screaming at the top of their lung to this heavy banger. Some fans started calling out requests between songs, one of which conveniently was the next song in the set, but Lindsay and Jason played it off like they were taking requests which was pretty crafty, until they confessed that wasn’t the case. Frenzal Rhomb played a great mix of old and new tunes including Mummy Doesn’t Know You’re A Nazi, Russell Crowes Band (another one that absolutely blew up, well, almost all of them did), 5000 Cigarettes, Shelving Stacks, School Reunion, I Went Out With A Hippy And Now I Love Everyone Except For Her and When My Baby Smiles At Me I Go To Rehab. After continuously teasing covers and even partly playing some they eventually played War Pigs by Black Sabbath which was amazing. They played a solid one hour set, mentioning that they aren’t used to playing in places that open so late so they’re just gonna keep going until the cops shut them down. To finally finish out the night, the not-so encore encore consisted of Never Had So Much Fun and Punch In The Face. Frenzal Rhomb are always a fun band to watch, they are super high energy and the audience always matches that vibe. I always suggest seeing them whenever you can.

Unfortunately, you cannot catch Frenzal Rhomb as well as SUDS and Von Stache tonight at The Pelly Bar in Frankston as it’s a sold-out show.

Special thanks to SMB Presents