Over the last few weeks, creepy letters and photos have been surfacing on social media accompanied by cryptic messages:

This, of course, is the work of Melbourne’s GRAVEMIND who, in classic form were teasing the release of the next single “Phantom Pain” from the upcoming record CONDUIT. Referred to by the band as the “Darkest offering yet” this track is sure to get fans even more excited for the new record. GRAVEMIND are currently touring Australia with MAKE THEM SUFFER and will be returning to Melbourne for the Greyscale Records Showcase in August. 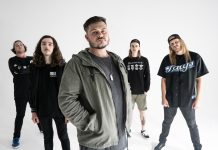