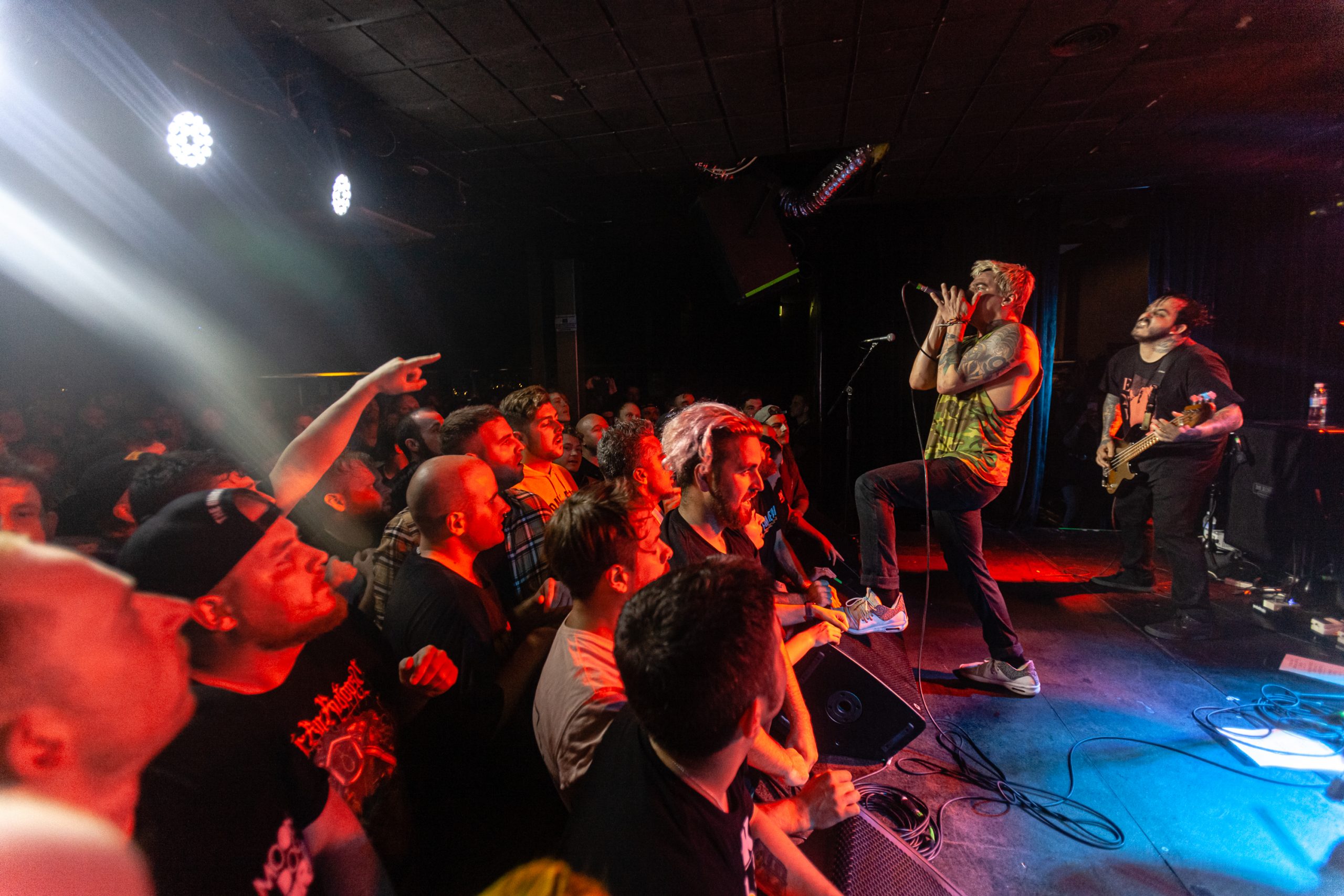 It was well worth heading out to Stay Gold in Brunswick on Monday night to see the sold-out Stray From The Path show with Kublai Kahn, Deadlights and Starve. Despite the 32 degrees day, the A/C was doing an excellent job in the venue keeping everyone at a comfy temperature (well, as comfy as possible for a heaving room full of spin kickers and stage divers).

This was my first time seeing Starve and the sound they manage to put together with just one guitarist and a bassist was so full, which definitely impressed me from the get-go. That, coupled with Jordan’s huge vocals and a few cheeky pig squeals, you’ve got a good damn time. Mikey Arthur of The Gloom in The Corner also made his guest vocal appearance on Countermotion, which had an immediate effect on the crowd. The energy in the crowd remained as the boys went straight into a new song called “Shiver” which is set to drop sometime in the next 2 – 3 weeks. The set finished on a heavy note with some great crowd involvement. Definitely a band to look out for.

As the stage was getting set for Deadlights, the room filled out, even more than it was before, with a crowd of people who were gearing up for what was to come.

“MELBOURNE!!!” vocalist Dylan of Deadlights immediately grabbed our attention, “Cool kids to the front!” he said as the lighting changed to a cyan colour which backlit the stage just as the set began. Throughout the entire set Josh (drums) provided a rock-solid backbone for each song. This hit me most when the band played their recent single “Sugarcoated Psychosis“, he dominated a kick/hi-hat pattern in the first verse with awesome dynamic control.

If clean playing is what you’re after it’s not limited to the backline. Deadlights have some of the most unique clean vocals going around. From the intervals in the melodies and unique crisp live harmonies to the pitch screams that are mixed in with them, these three vocalists together are amazing in a live setting. Then there were the screams, dude can be goddam demonic when he wants to be. Hella high screams plus strobe lights going hard plus people running into each other equals a sick set.

By this point in the night, the venue was packed out. The pit widened significantly as people went to get their drinks but I suspected it would stay that size. A deep yellow enveloped the stage as the band set up.  It seemed Kublai Khan briefly ran into some technical difficulties but this was dealt with quickly by swapping over a head on an amp stack. The lighting faded to red as there were massive swells over the PA and there were huge open notes on the guitars which led straight into BIG CHUGS over a blistering D-beat. This resulted in immediate violence with several circle pits formed over the course of the whole set. The one thing that I’ve always loved when I see Kublai Khan is moments in their music where there is an amazing use of space, the brief moments of no guitar that come back with the drums have always brought so much energy into the room, and tonight was no exception.

The excitement peaked when “The Hammer” was played with stage dives, front flips and spin kicks, it went off. You could hear the lyrics being shouted from every corner of the room.

Just before they played Self-Destruct, Matt (vocals) yelled out “No excuses, just results!!” and if I had to describe the experience of a Kublai Kahn set in one phrase, that would definitely be it.

The good blokes also “[paid] homage to all the creatures and people lost in the bushfires” in the middle of their set.

When Stray From The Path came out they wasted no time getting straight into it, stage diving from the very first song. As the set continued, Drew (vocals) seemed to be on any part of the stage at any given time, showing an impressive lung capacity during “Outbreak” as he busted out long screams which were impressive enough without the BLEGH he added at the end. SPEAKING OF BLEGH’S. Sam Carter from Architects made an appearance for his guest vocals on “First World Problem Child”

The band addressed the content of their songs and how polarising it can be but that it’s “[their] responsibility to use the stage as a platform to voice their opinion” and that they “see a lot of different people coming together in this punk/hardcore hip hop… community” but in turn the community has no room in it for racism, fascism or Nazi’s.

Then launched straight into “Goodnight Alt-Right”.

The passion from their lyrics really radiated throughout the room and the groove from the riffs with the vocal delivery had the whole crowd bouncing. I had some serious Rage Against The Machine vibes going on, and about 10 seconds after I wrote that in my notes, during “Badge and a Bullet” they transitioned into a cover of “Killing in the Name Of” (Rage Against The Machine), I was pretty stoked.

Big thanks to Destroy All Lines, Stay Gold and everyone involved, every band killed it. It was a night of riffs slamming relentlessly into my entire being, and I honestly wouldn’t have it any other way.

Keep up to date with the bands on Social Media:
Stray From The Path
Kublai Khan
Deadlights
Starve