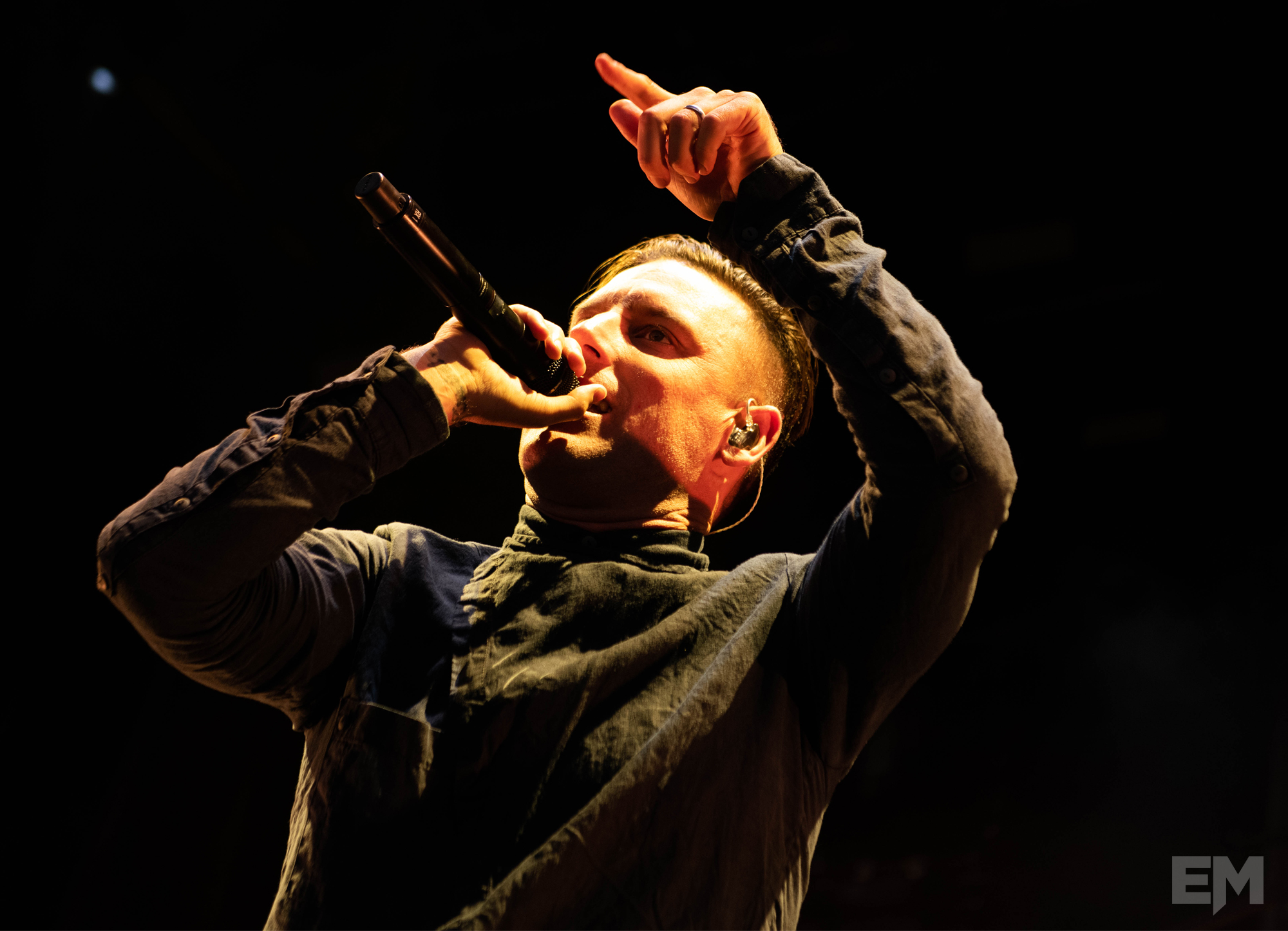 Now that Good Things 2019 is done and dusted we look back on the full day of festival fun and highlights from the Melbourne event.

The crew at Everyday Metal showed up to the Flemington Racecourse bright and early (well, early for us) and we waited in line with all the other keen punters. Spirits were high and the excitement was palpable. In order to see as many bands as possible and to subdue our FOMO, we downloaded the Good Things app and laid out an airtight plan so that we could partake in a smorgasbord of alternative music in tiny bite-sized portions but that would still satisfy our eclectic appetites.

The gates opened and we rushed over to Stage 3 where The Bennies had just started. Their super upbeat ska style punk rock was a fun way to start the day. The energy on stage was super high (and not just because they were high – just guessing). Lead singer Anty who wore skintight leggings with a weed leaf motif introduced the tracks, some brand new and some classics that the fans could sing along too.

We headed to the main stages where we caught the tail end of Poppy and arrived at Stage 1 just in time for a real throwback, Reel Big Fish. We heard horns playing the theme music for 2001 A Space Odyssey as the band members walked out one by one. We were there when they played ‘Pissed Off’ a track off their 2018 album release ‘Life Sucks…Let’s Dance!’. You can’t not bop along to the Reel Big Fish horn section, even the security guards couldn’t help themselves! It was all super nostalgic, with Reel Big Fish performing and people in the crowd wearing Hawaiian shirts, Mambo clothing and sporting tiny backpacks, I could have sworn it was the 90’s.

To propel us back into the present we rushed over to check out Melbourne’s very own deathcore superstars, Gravemind who pulled in a decent crowd at Stage 5. This was the first real heavy act for the day and for me it was a definite highlight. Gravemind gave a dynamic performance on stage and ignited a furious energy in the pit. They played the tracks ‘Lifelike’, ’Phantom Pain’ and an older release ‘The Deathgate’ which has some old school metal riffs. They ended the powerful set with the track ‘Volgin’ from their latest album Conduit that was released this year.

Next up was another 90’s throwback with the Aussie alternative metal act ‘The Butterfly Effect’. The last time I saw them perform was probably around 11 years ago in a small music venue in London but their performance at Good Things was flawless as if they had never taken a break from touring. I watched the audience as they were reliving their youth when they used to feel ways about stuff. Very moody feels at Stage 3 in the late afternoon.

We headed back to the main stage for Trivium which was a total blast, they rocked it hard and the performance was super tight. There was a massive cheer from the crowd when Trivium walked out and frontman Matt boomed into the microphone ‘It’s time to fucking move!’, and move we did. There were crowd surfers during the entire set, except during the encore when Matt got the entire audience to squat down until they were instructed to jump the fuck up.

Still on a high from a pretty rocking performance by Trivium, we moved across to Stage 1 to see none other than Bad Religion, the OG punk rockers. They played 21st Century from their 1990 release album Against the Grain which again gave me (and the audience) some pretty nostalgic feels. Greg Graffin then told the crowd about a new album they just released this year, Age of Unreason ‘I know, I was just as surprised as you’ he joked. So for the first time ever in Australia, they played one of their new tracks Chaos From Within. Then all of a sudden I noticed rolls of toilet paper majestically flying through the air, criss crossing over the mosh in all directions and towards the stage, ‘Thanks for the shit tickets!’ Matt responded after a roll of TP arched over him and landed behind the drum kit. For the rest of the evening, every set on the main stages would be accompanied by random acts of TP. We would have to witness the security intercepting rolls midair with their big mitts and then getting wads of TP stuck to the bottom of their boots. It was all hilarious, but only if you weren’t thinking about where all the toilet paper was coming from (there was only one main set of toilets for the whole festival).

We bailed on all the shenanigans at the main stage so that we could check out Thy Art Is Murder, who we have actually seen perform many times over the past few years, but this would be the first time watching them at a festival. CJ grabbed the mic and addressed the legion of fans in the crowd ‘If you’ve got a head on your shoulders and feet on the ground, every one of you silly cunts is gonna jump when this song starts!’. After enjoying some heavy fucking music we raced back to the main stage to catch the beginning of Violent Soho.

Simple Plan were just finishing up singing their track ‘Perfect’ (you know the one), as we were making our way through the crowd, and we made it to the front just as Violent Soho began ‘We are Violent Soho and we are also sorry we are not perfect’. They played a few tracks that I recognised including their 2015 release ‘Like Soda’. I was having a really good time, but we had to leg it back to Stage 4 to see another blast from the past, Karnivool.

When we arrived back at the smaller stages Thy Art was still whipping the crowd into a frenzy, and clearly pissed off by the organised wall of death that occurred during the Veronica’s set, CJ was attempting to orchestrate an even larger one ‘Aint no pop band doing a wall of death at this festival…. Fuck those cunts!’. Total crack up! After all the mayhem subsided and Thy Art left the stage, Karnivool slowed things down a bit with their style of late 90’s progressive rock. Although I never really listened to Karnivool back in the day, I looked around at the people in the audience while they were playing the tracks ‘Shutterspeed’ and ‘L1fel1ke’ and I can tell you that everyone was absolutely loving it and the fans swayed along to the solid vocals of Ian Kenny. This was a lovely performance.

Although we didn’t cover A Day To Remember on Stage 2, they were playing in the background while we chilled out on the grass to have a few beers (well deserved and much-needed beers). The vibes were flowing and all the festival goers were also having a chill on the green as the sun was slowly setting. The headliner for Good Things 2019 was to be Parkway Drive and whether people came to see them specifically or not, the main stage area was dense with bodies, as everyone had slowly made their way to Stage 1 to check out these Metalcore juggernauts. The band made a grand entrance through the crowd using security and live feed cameras, the whole set up made it feel like it was a grand arena and Parkway Drive performed as though they were playing to millions. We all stood there in awe at the massive spectacle of lights, smoke and pyrotechnics.

I ended up getting to chat with a lot of people the next day in Melbourne’s city centre who attended the Good Things festival 2019, and no one had anything bad to say about it. A lot of country Victorians made it down to Melbourne specifically for the event, some highlights for the attendees included A Day To Remember, A Simple Plan and the wall of death at The Veronicas, but everyone agreed that it was Parkway Drive that stole the show.

All in all, it was an amazing festival day out for all involved and I would definitely go again.

MUSIC – WELCOME BACK DEADLIGHTS AS YOU’RE ‘BATHED IN VENOM’