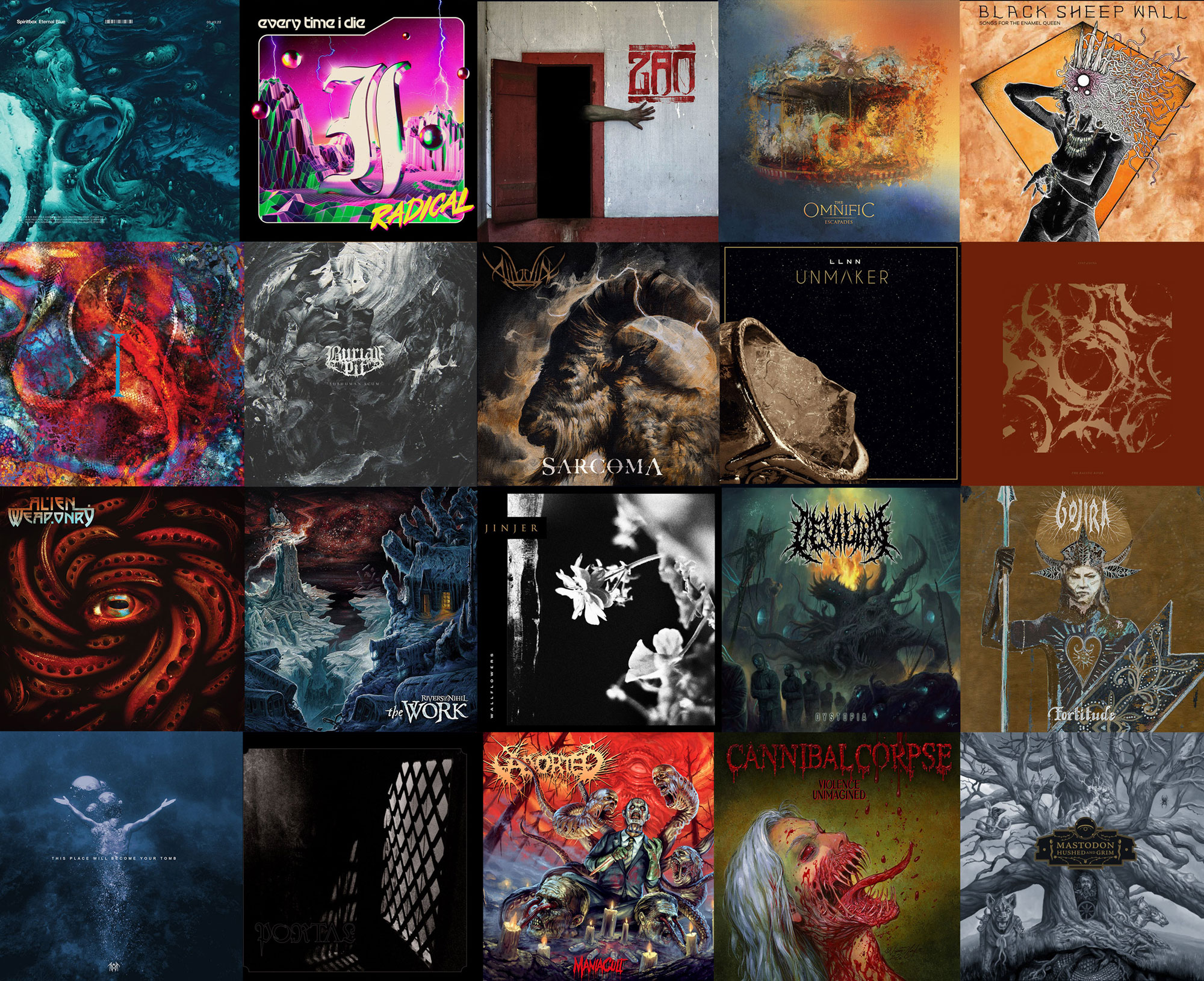 2021 has been another difficult year for the music industry with bands, venues and promoters continuing to feel the strain from the ongoing pandemic. In this challenging time, many bands have pushed through the adversity to release some truly impressive albums. This is is our top 20 releases for 2021.

Coming in at number 20 is everyone’s favourite extreme metallers turned hard rockers MASTODON. This isn’t MASTODON’s greatest release, yet it is filled with some pretty easy listening jams such as Pushing The Tides, Teardrinker and Pain With A Ancor

Since their 2005 album, The Way Of All Flesh Gojira have become a staple in the heavy music community and developed a global fanbase. “Fortitude” is another commendable effort from the French metallers, although Fortitude is not groundbreaking, Gojira has an extremely refined sound and a healthy love for mother earth. Stand out tracks include ‘Another World‘, ‘Amazonia‘ and ‘Born For One Thing‘.

Violence Unimagined is Cannibal Corpe‘s 15th, yes, 15th studio album, this alone deserves an entry in the top 20. This record is filled with classic brutal death metal tracks like ‘Murderous Rampage’, ‘Inhuman Harvest’ and driving it home with ‘Cerements Of The Flayed‘.

Belgium’s ABORTED never cease to impress, dropping crushing album after crushing album across their 25-year career. ‘ManiaCult‘ follows Wayland Thurston, a cult leader that serves otherworldly beings by torturing others, this narrative of horror plays out across 11 tracks of unimaginable horror. Honourable mentions include the title track ‘ManiaCult‘, ‘Impetus Odi‘ and ‘Drag Me To Hell‘.

With a career spanning over 30 years, CONVERGE has a sound rooted in early punk, hardcore and are considered by many as one of the defining metalcore bands. Bloodmoon I sees CONVERGE collaborating with successful folk artist Chelsea Wolfe to create an experimental album that moves between heavy, ambient and melodic. Top-rated tracks include title track Bloodmoon, Viscera Of Man and Coil.

BLACK SHEEP WALL kept fans waiting five years to hear new music and they definitely didn’t disappoint. Songs For The Enamel Queen leans hard into the band’s sludgecore sound. While keeping true to their roots they expanded on their sound offering more experimental elements that flirt with alt-rock, post-hardcore and even throw in a little trumpet. Stand out tracks include Human Shaped Hole, New Measures Of Failure and Concrete God.

EVERY TIME I DIE are onto their 9th studio album, RADICAL is yet another fast-paced heavy-hitting release that you have come to expect, yet also features some of their most creative writing to date. This album is adventurous, yet extremely well refined. From guitars, to drums, to vocals, each aspect of every track feels intentional, fleshed out and even a little tongue and cheek. Notable tracks include Post-Boredom, Planet Shit and Things With Feathers.

The debut release from Cult of Luna’s newly-founded record label Red Creek Recordings. The Raging River has an amazing pace, linear across this five-track ep, devastating and extremely enjoyable.

Eternal Blue is the debut full-length record for Canadian outfit SPIRITBOX. Fronted by the absolute powerhouse Courtney LaPlante who’s vocal style moves seamlessly through cleans and growls with a smattering of pop. The vocals meld nicely with heavy guitars and the electronic elements throughout, a special mention goes to the bass line on Secret Garden and the sneaky drum and bass break on Holy Roller.

ALIEN WEAPONRY has always displayed musicianship beyond their years yet this record shows how much they have matured. Powerful and filled with old school metal vibes, Tangaroa is some of their most passionate music yet delving deep into the stories of the native Māori people of New Zealand. Popular traks include Hatupatu, Blinded and Buried Underground.

DEVILOOF are seriously good fun, mixing heavy riffs, nasty breakdowns with j-pop and traditional Japanese instrumentation. Their latest record Dystopia sees the band doubling down on their horror theme with a new darker and more blood-soaked look. DEVILOOF are described as a visual kei band yet what sets them aside is their tremendous technical skills and impressive vocal range. notable tracks are Orwellian Society, Libido and DIsclosed Pandora’s box.

LLNN are an amalgamation of hardcore, post-metal and sludge, a combination that they execute extremely well. Clearly influenced by 80’s sci-fi soundtracks and video games, Unmaker is bleak, chaotic and also ambient. The best quote we have heard about this album comes from Dave at Metal Epidemic – “It’s the audio equivalent of a truck full of gravel being dumped on you, you know it’s coming, but you still can’t prepare for it”.

JINJER are unstoppable, touring the world relentlessly playing sold-out show after sold-out show. When touring ground to a halt they hit the studio to produce their fourth studio album Wallflowers. This album does tread some familiar territory blending vocalist Tatianas signature style with groove and gritty metal. This album doesn’t feel like a huge leap for the band but more of a thank you to their loyal fan base and there is no doubt the new tracks will go down a treat when they play them live.

Melbourne progressive instrumental trio The Omnific consists of two bassists and a drummer. This combination creates some of the most unique, intricate and ambitious music of 2021. From beginning to end Escapades is powerful, technical and refreshing in its authenticity and creativity. Not only do they have two extremely talented bassists they have one of the best live drummers we have ever seen.

Bleak, grim and harrowing, Sydney Based BURIAL PIT‘s latest release Subhuman Scum feels like the perfect soundtrack to a challenging year we have all faced. BURIAL PIT had intended to tour this release in the second half of the year and it was cut short by more lockdowns. As a treat to their fans, they released a live stream playing the album in full.

Any year a new PORTAL album drops is a good year, but in 2021 we received two new portal records. Avow showcases a more progressive sound for PORTAL with tracks less laden with distortion allowing the instruments to shine through in a way we haven’t heard in the past, most notably on the track Offune. Hagbulbia on the other hand is five tracks of sonic trauma that feels like less of a album and more of a ceremony to summon otherworldly creatures.

When the track 40 stories started to do the rounds it indicated that there may be more melodic and clean vocal-driven records coming for Portland’s ALLUVIAL. 40 stories is an amazing track that shows just how talented each member of the band is, yet is a sort of red herring as the album features some of the most punishing and creative death metal to come out in 2021. The opening track Ulysses is menacing, heavy and fast-paced. The album continues to melt your face in the proceeding tracks Thy Underling and Sarcoma, giving you some rest with 40 stories and the interlude of Zero. Exponent drops you right back into the brutality yet switches pace again on Sleepers Become Giants and Sugar Paper and closing out with Anodyne.

The Work is deep and brooding, there is a delightful playfulness that shines through on the track Wait where the band goes full power metal and features one of the best guitar solos of the year. The singles Focus and Clean are the most Rivers sounding tracks yet things get elevated on The Void From Which No Sound Escapes. This track is absolutely massive, the writing is solid and the composition is outstanding, not to mention it brings back the saxophone that fans have come to love. Rivers Of Nihil had the confidence to release an album that is both ambitious and vulnerable and The Work definitely paid off.

You can keep up to date with each band on their respective social media:

EVERY TIME I DIE

THE BRAVE – LIVE AT STAY GOLD